Guido Kunze already has three entries in the Guinness Book of World Records. But he is not yet satisfied. The extreme athlete is always looking for new challenges. His latest: riding his GHOST Road Rage for 24 hours on the Sella Ronda in the Dolomites. With only one gear. 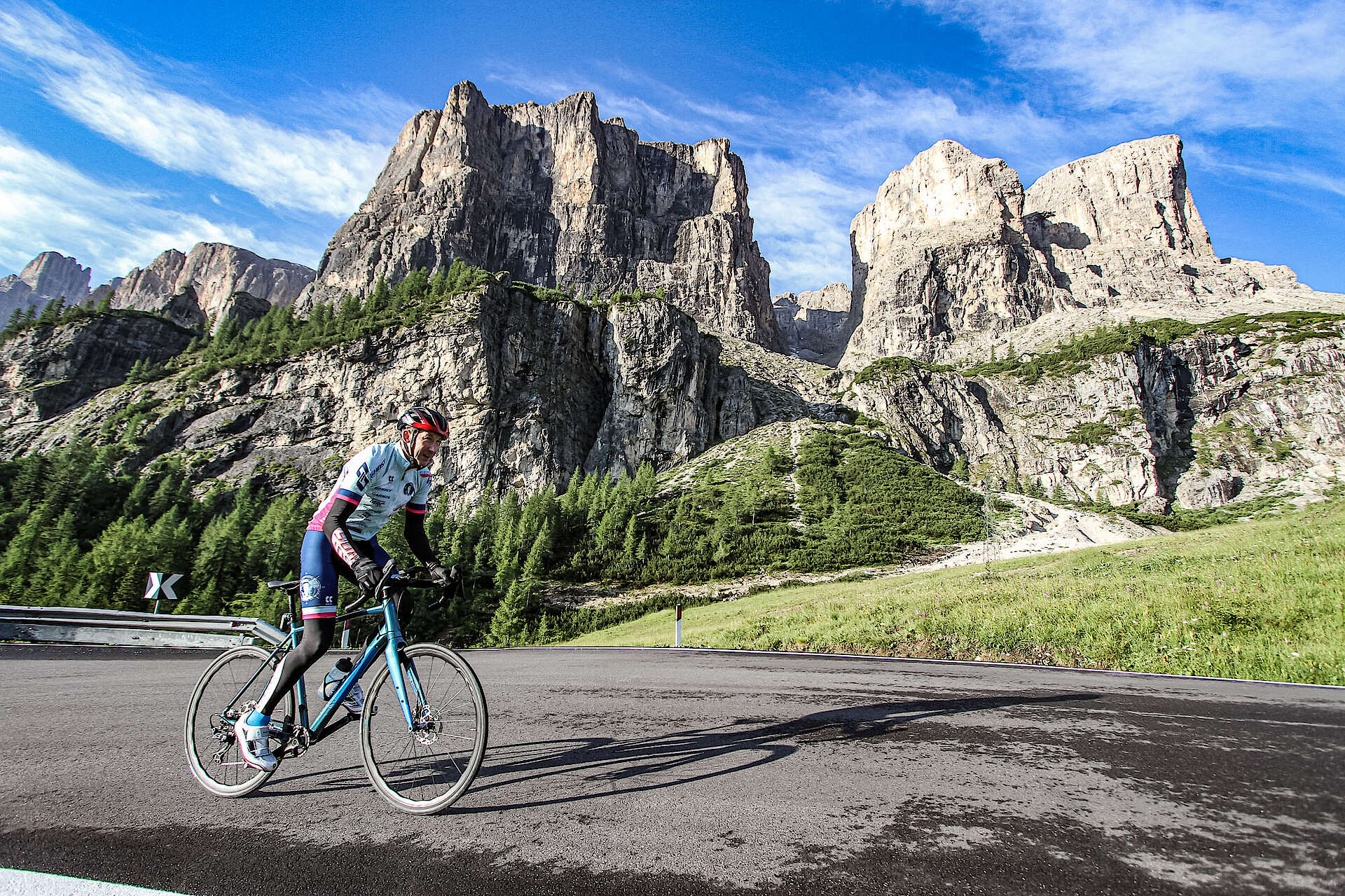 Lightning flashes through dense hail on the Passo Pordoi - followed by frightening thunder. A raging storm, and the bright day suddenly turns dark. It's another 23 kilometers to the hotel, about an hour. Completely soaked, cold and exhausted, a lone cyclist arrives there and jumps under the hot shower. It looks like it's all over before it's even really begun. Guido Kunze is an extreme athlete, with three entries already in the Guinness Book of World Records, and he wants to add one more doing just this. On the Sella Ronda. Four mountain passes, 53 kilometers, 1650 meters of altitude. During wintertime, a dream location in the Dolomites for skiers. And at the top of every cyclist’s bucket list in the summer. 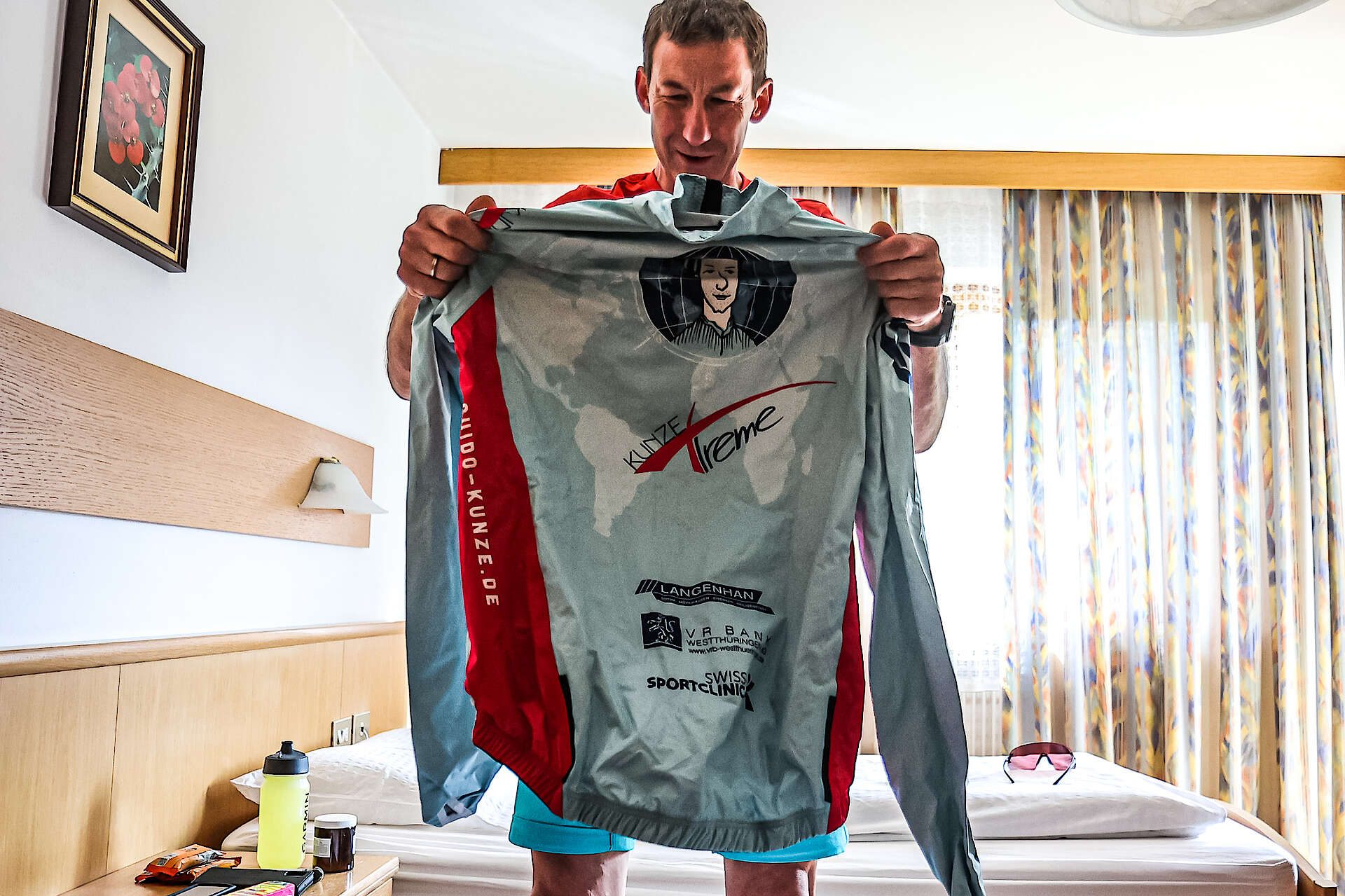 The day before the start, Guido is still in good spirits. He wants to circumnavigate the Sella massif for 24 hours. With just one gear. The fact that the weather forecast is - let's say - suboptimal for the end of July doesn't bother him much. But he decides to rebuild his GHOST ROAD RAGE gravel bike again. 40 teeth in the front, 25 in the rear. That was his original plan, which he decides to change. Guido opts for a lighter gear ratio, quickly mounting a 30-tooth sprocket in the front. "If I pedal tough gears when it's cold, my muscles will cramp after the descents," he explains to an Italian road bike enthusiast who looks on in disbelief and asks curious questions. Gesturing with their hands and feet they overcome the language barriers. The rear derailleur? Stays on in order to get the rear wheel out quickly in case of a technical issue. The only problem is that I'm not allowed to change gears for 24 hours, otherwise the chain will come off," says Guido. 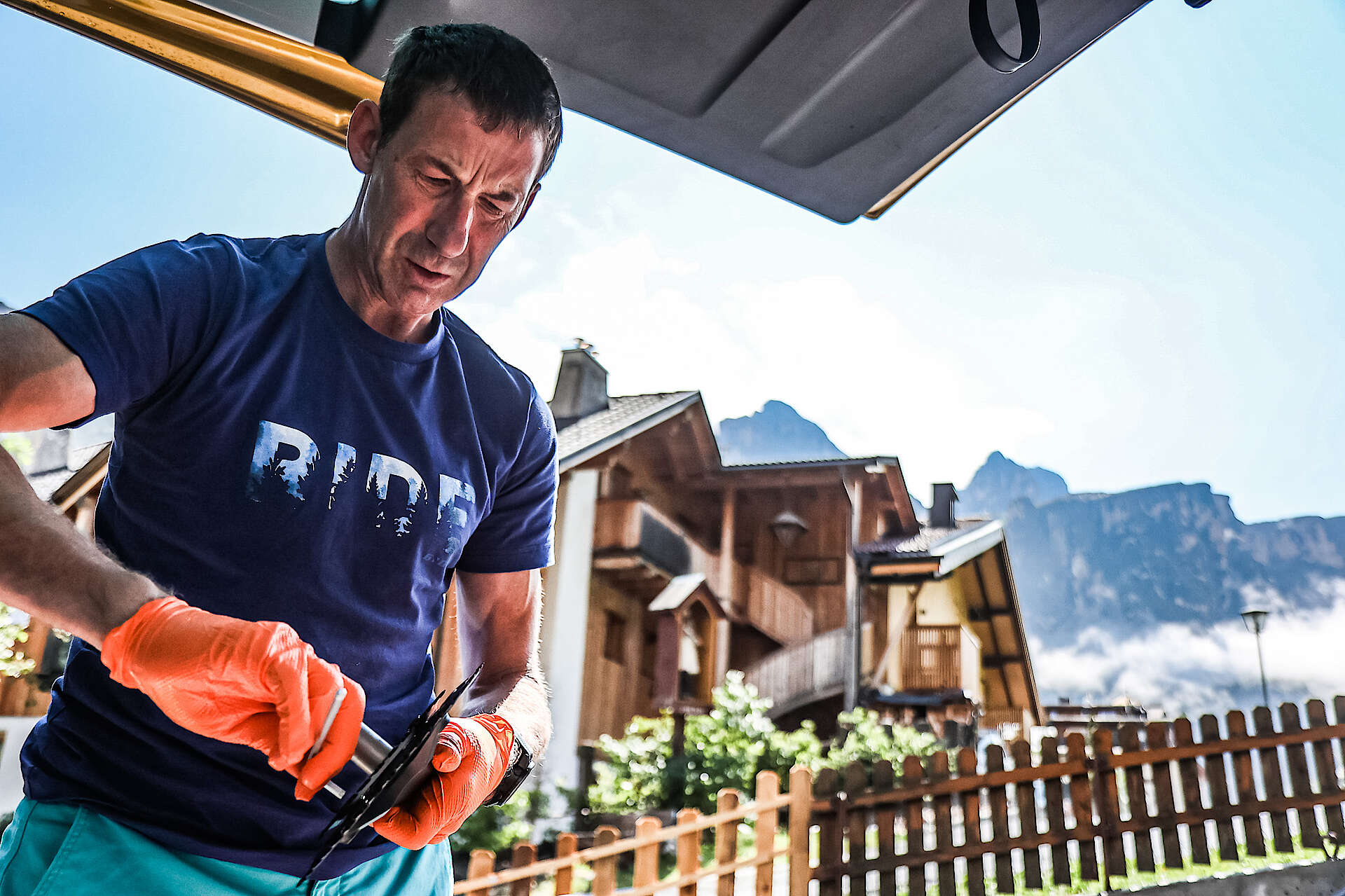 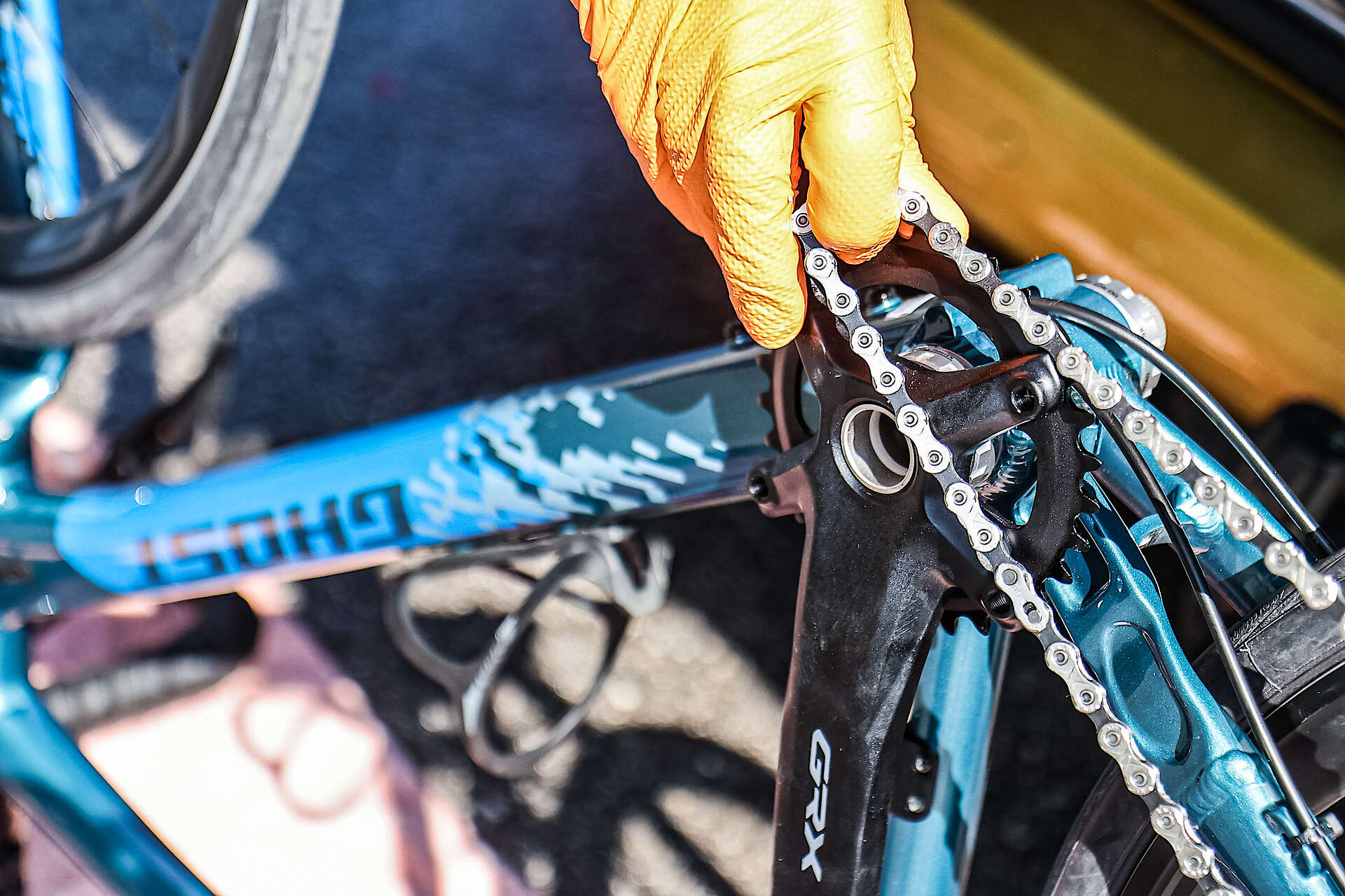 Guido Kunze is an old pro at extreme sports. Born and raised in the German state of Thuringia, he actually came to cycling via running - but when he did, he did it with everything he had. Together with three other friends, all of them with a penchant for extremes, they came up with the idea of riding the Race Across America. 5000 kilometers non-stop from West to East across the USA. "In the end, I was the only one of us left standing at the start line," he says. But listen to this! In 2008, Guido was only the fourth German ever to reach the finish line after twelve days, totally exhausted and with a completely chafed backside. He then crossed Australia by bike, rode the Great Wall of China and even received an audience with the Pope. An impressive experience, even though Papa Francesco's direct line to heaven was not really helping him at this time - at least not with regard to the weather. 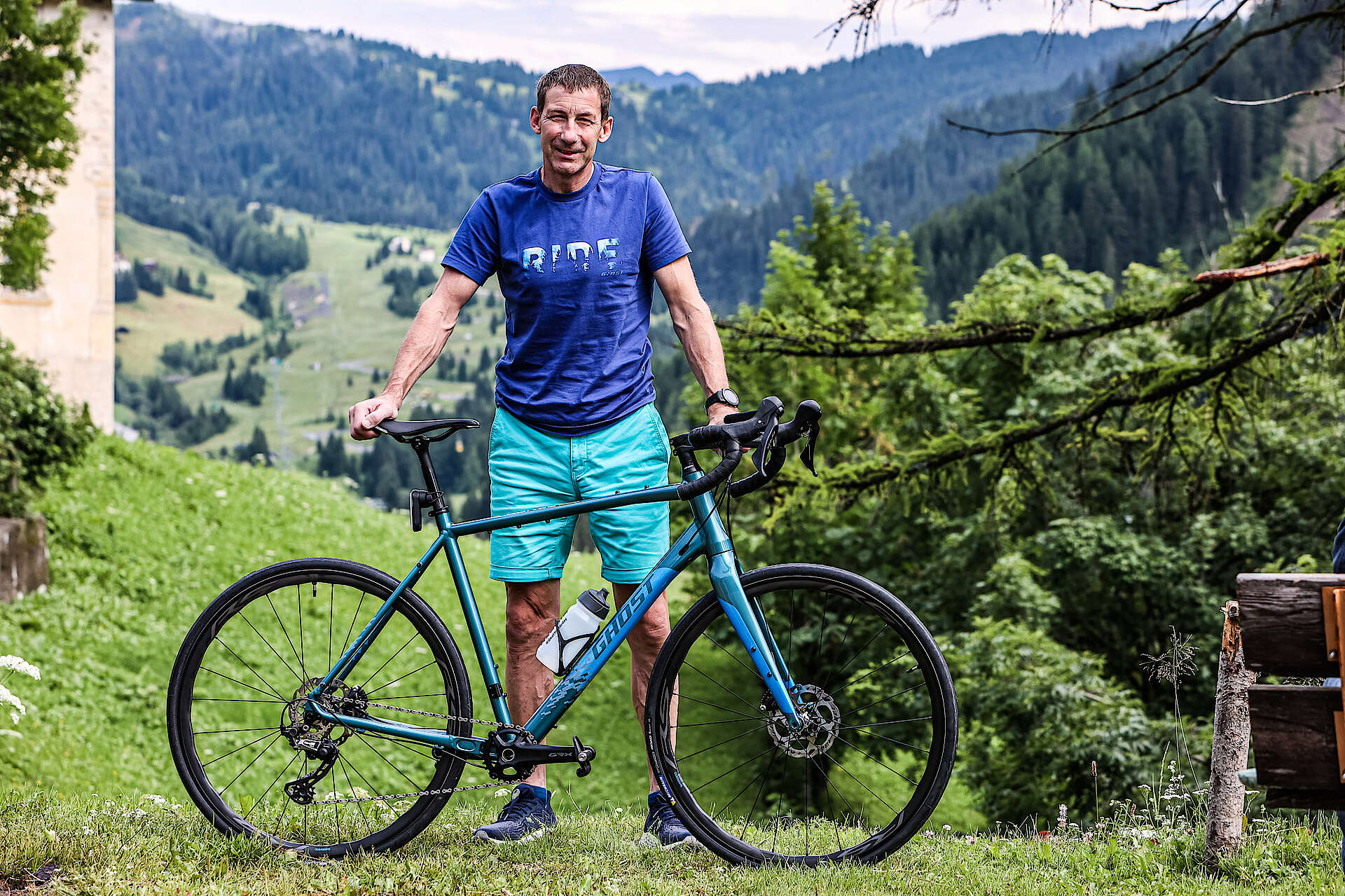 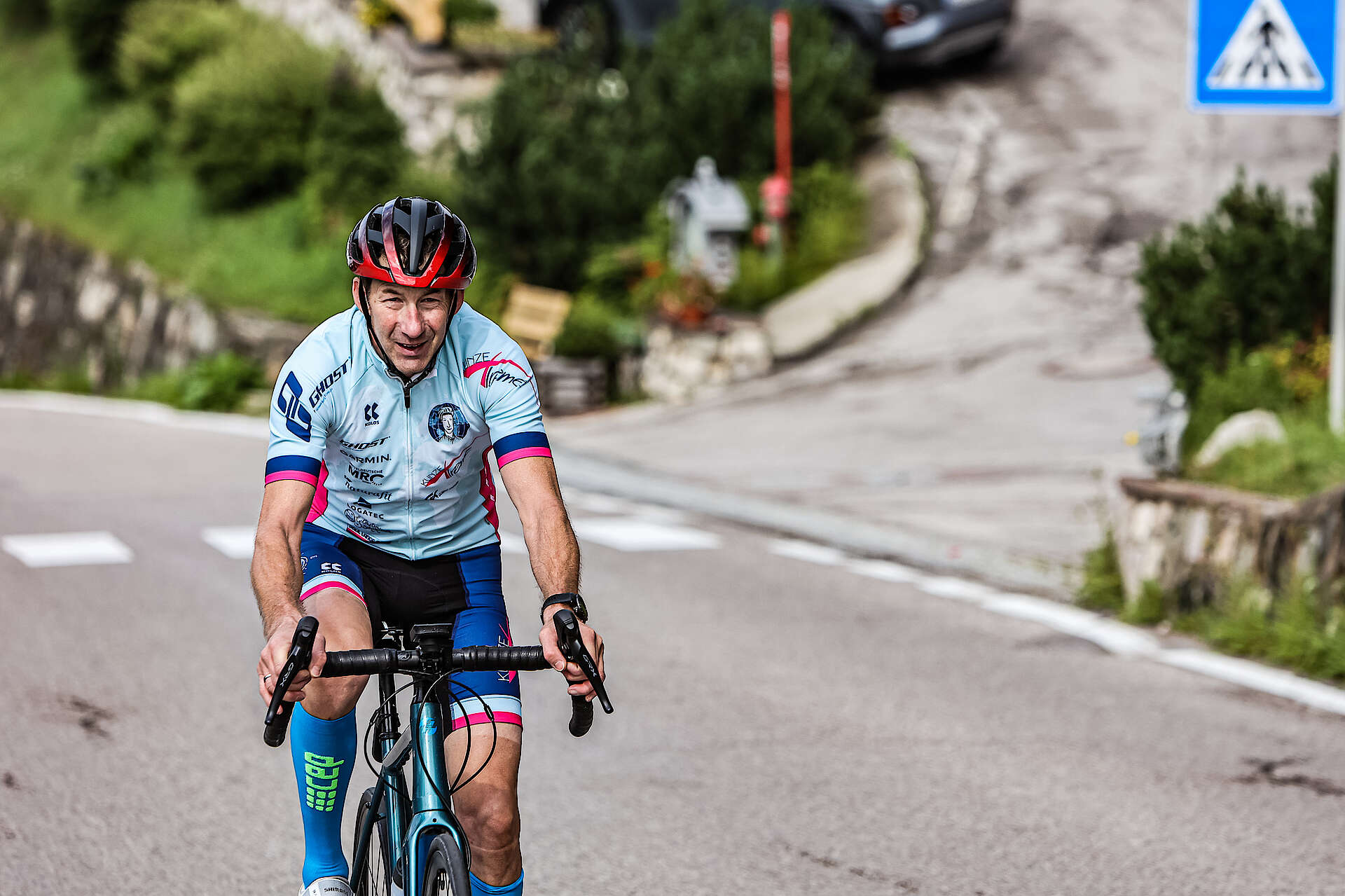 It might not be so bad, if Guido Kunze didn't really love summer. Even blazing heat. When he sets off from Colfosco on the Sella Ronda - with nothing in his jersey pockets but a pump, tube, bar, windbreaker and phone - the sun is still shining. But not for long. Right at the end of lap one, it's pouring with rain. Guido's wife Gaby and son Melvin are standing by the course, handing out energy bars and a new water bottle. Guido is not discouraged, tackling the climb to the Grödner Joch for the second time-- and pleased to see that the rain is already easing again. "We're lucky, it could have been much worse," he says when he reaches the Sella Pass after almost exactly five hours. He quickly wolfs down a bar, pulls on his windbreaker and sets off on the descent in front of the spectacular panorama of the Dolomites.

With his single-speed bike, he has to rely purely on gravity on the downhill sections. Pedaling along makes no sense even on moderate downhills, and pedaling out of the curves is impossible. But the descents naturally offer good opportunities to collect oneself, to give body and mind a little rest for the energy-sapping climbs, where the gradient determines the cadence and mercilessly sets the rhythm. In lap two, Guido slowly starts to get used to the strain. He has his typical relaxed grin on his face as he climbs the Passo Pordoi. But then suddenly, the world comes to an end. 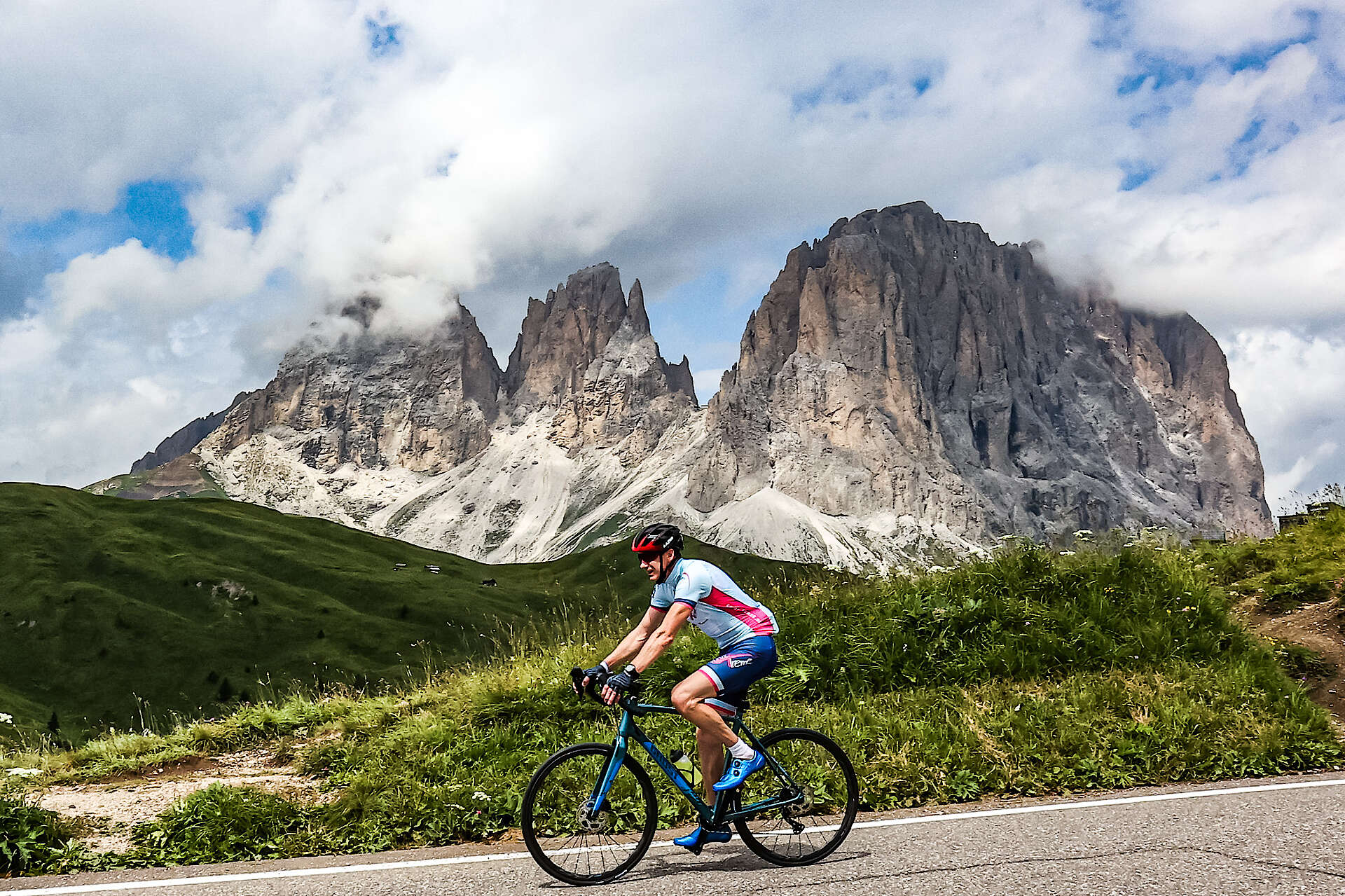 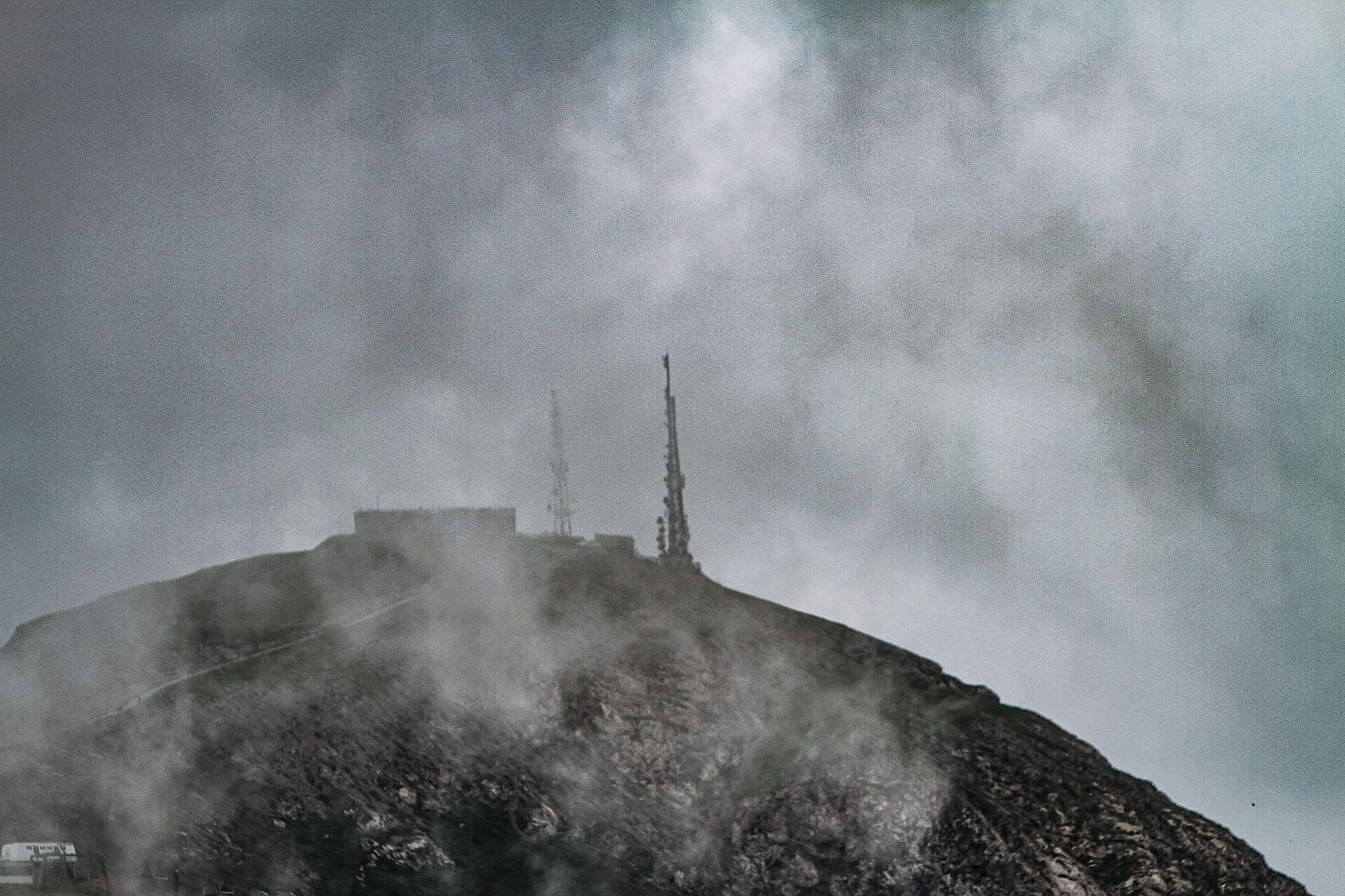 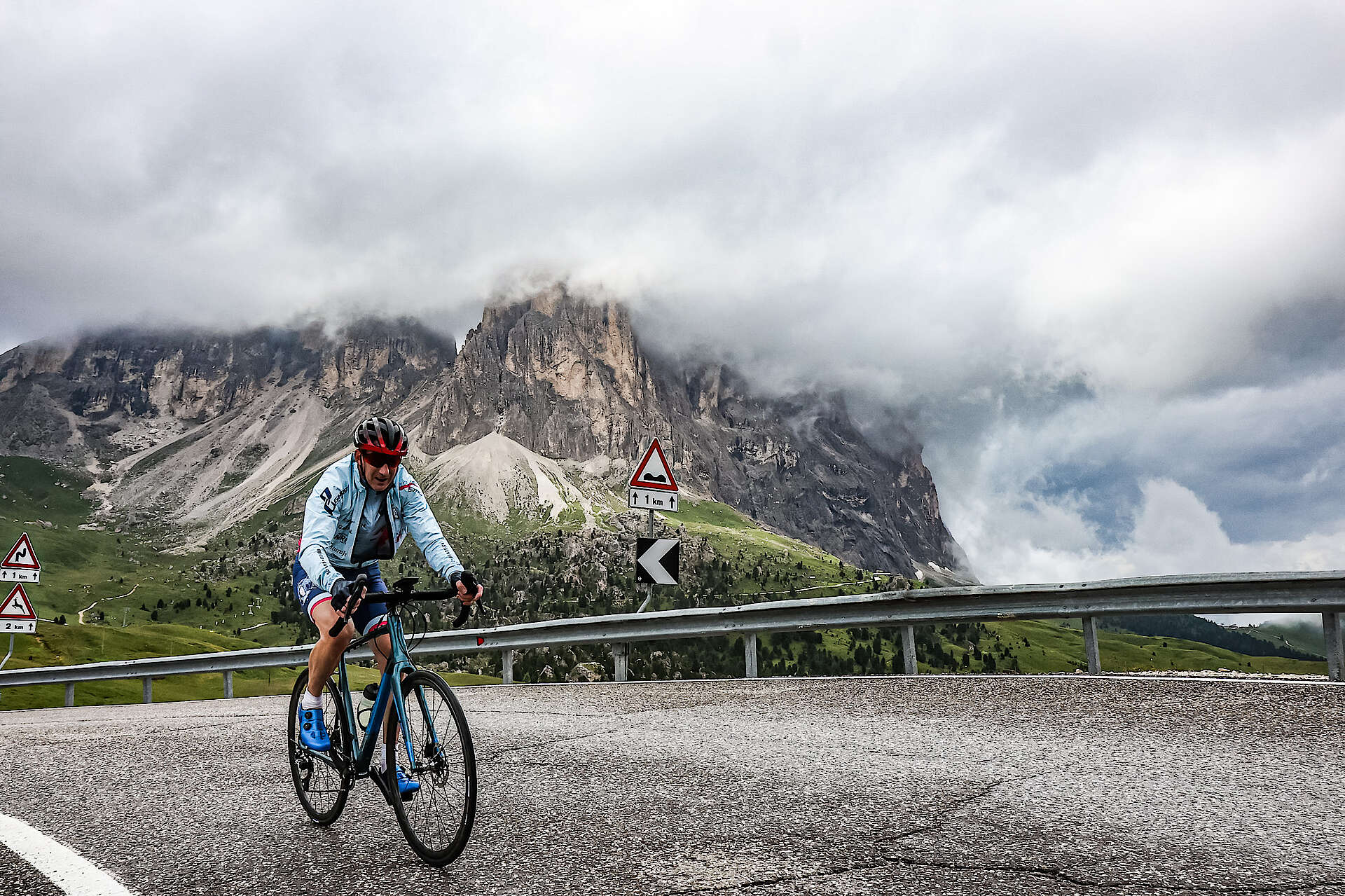 Lightning flashes through dense hail on the Passo Pordoi - followed by frightening thunder. A raging storm, and the bright day suddenly turns dark. "I can barely hold on to the bike anymore," Guido says in despair as the storm rages and the thunderstorm wreaks havoc. Hail whips into his face. Hands and feet are getting cold. And as he crosses the pass at 2239 meters, the descent becomes a shaky balancing act. Down in Arabba, the storm subsides, but not the rain. Guido still has to cross the Campolongo Pass, the lowest on the Sella Ronda, but the way to the hotel still feels like half an eternity. "If I stop now, I'll be even colder," Guido says in exasperation. "It's a choice between plague and cholera." 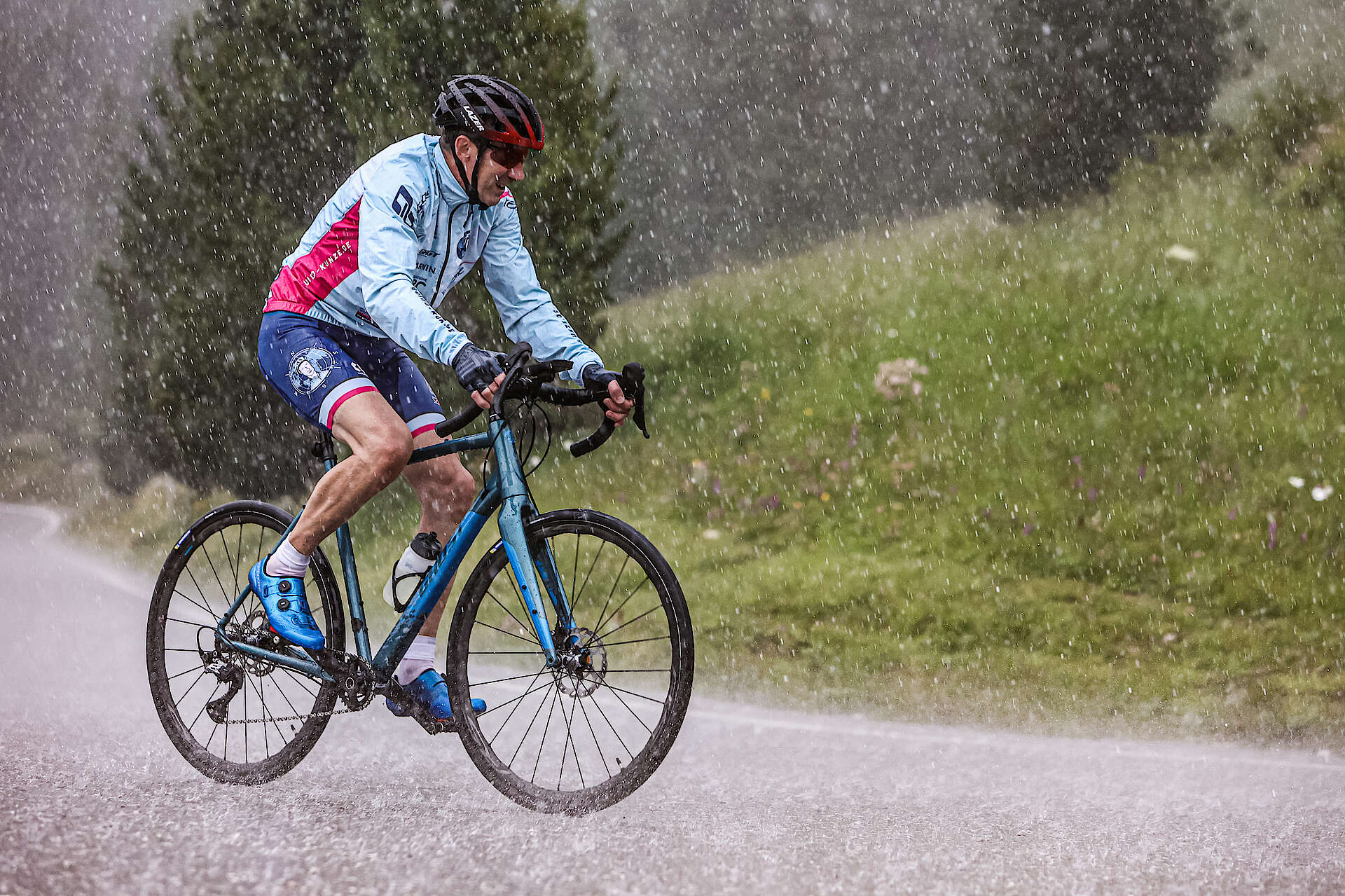 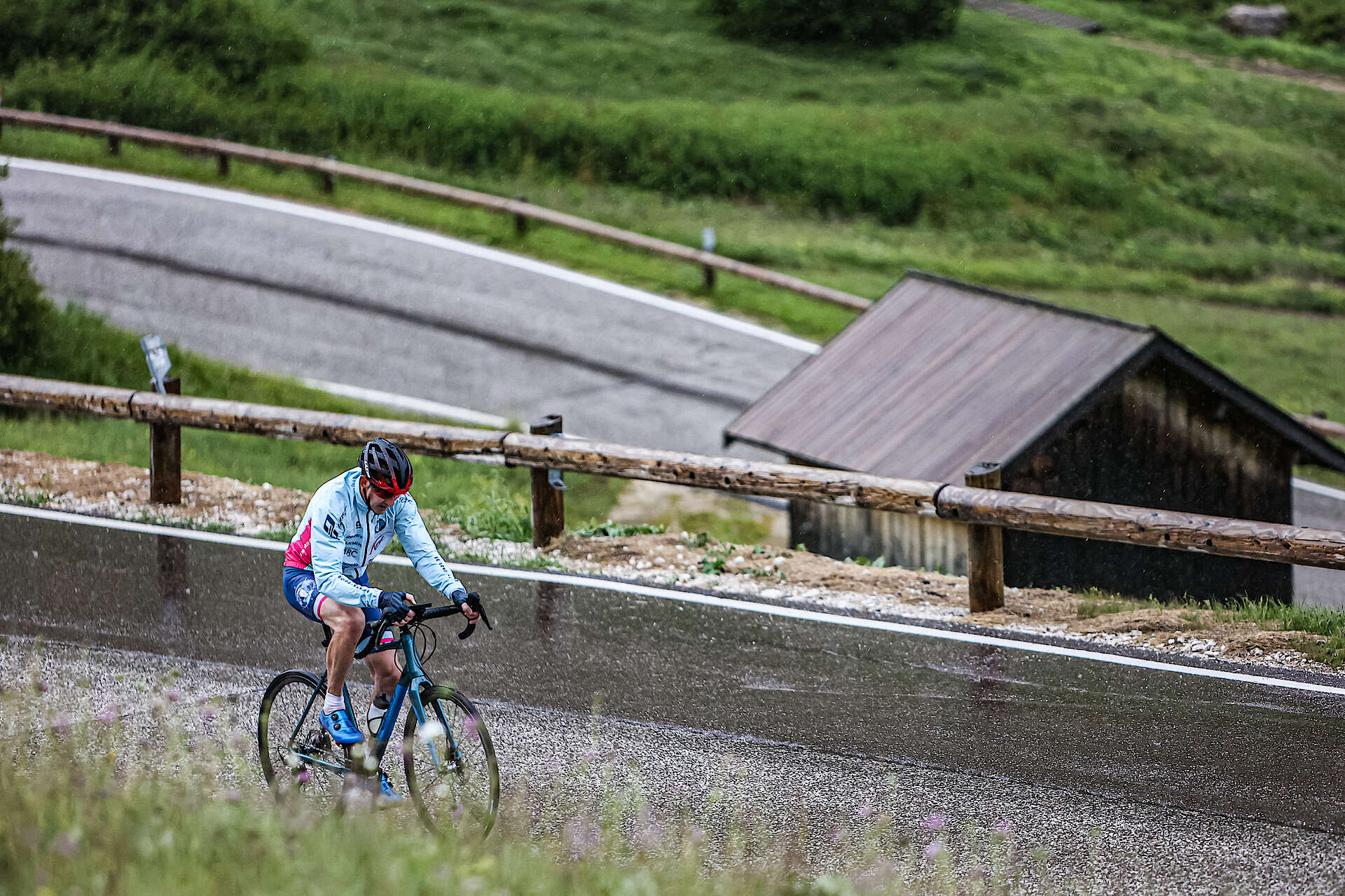 For Gaby and Melvin, it is pretty obvious that Guido must end his mission prematurely. The mission he has been looking forward to and working toward for so long. Last year in late summer, he already wanted to set an example - for exercise outdoors, in nature, especially in times when Corona caused so many restrictions. But then the virus came back with a vengeance, so Guido had to postpone his Sella Ronda project by a year. Pure nature combined with pure bike technology. No frills, but intense experiences. And something that no one before him has dared to do. All this has led him here - on his new record ride.

However, he can't even think of going on any further. It's still pouring and the storm front stubbornly remains stuck in the mountains. But Guido checks the rain radar and muses: "Anyone can do what I do. The question is always: How much willpower do you have?" He says that maybe 30 percent of it is about sports and athletic ability. The other 70 percent take place in the head. Which in Guido's case means, "I'm not going to give up anytime soon." And that's why, after a forced break of almost three hours, he's standing in front of the hotel at 8 p.m. sharp, swinging back into the saddle after the sky has closed its floodgates again. 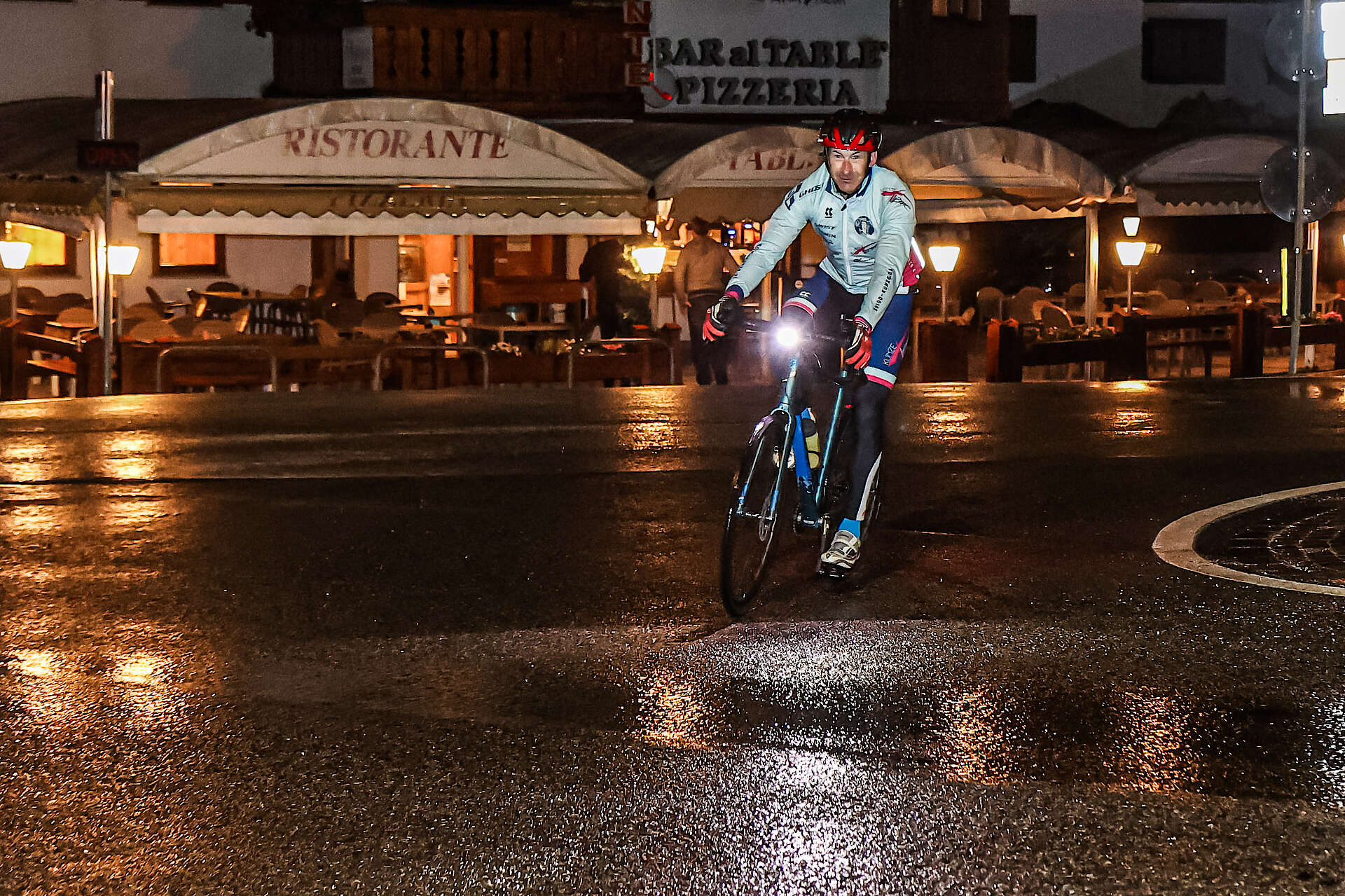 The rain radar forecasts a dry night. But after just ten minutes, it starts raining yet again. "The experience of having already been through pretty much everything helps me," says Guido, who doesn't let the weather get him down. While he still had to share the road with cars, motorcycles and numerous racing cyclists on his first two laps, it slowly becomes quiet. Night falls, a rabbit hops across the road, a deer jumps on the meadow towards the valley. But other than that, Guido is all alone. At least Gaby is always near him now. Melvin, too, who had actually been looking forward to pulling an all-nighter, but has long since been sleeping like a rock in the back of the VW bus. 20 minutes before midnight, he reaches the Campolongo Pass for the third time. Gaby hands him a roll and a bottle of Coke. Welcome change for the palate, which has now had to endure the taste of bars and energy drinks for 14 hours. "It's starting to feel like hard work," says Guido, who looks tired and can't tell what time it actually is. 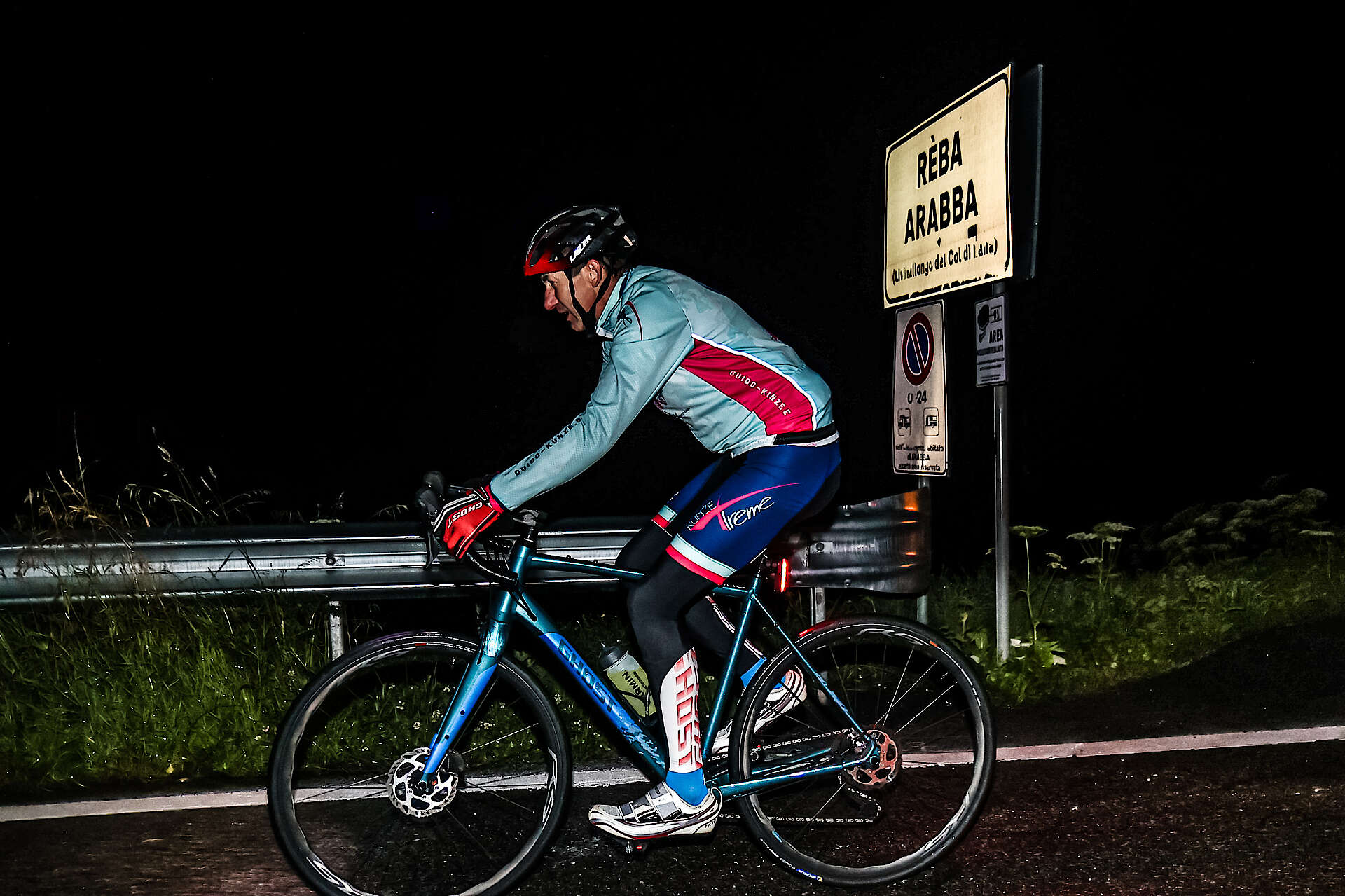 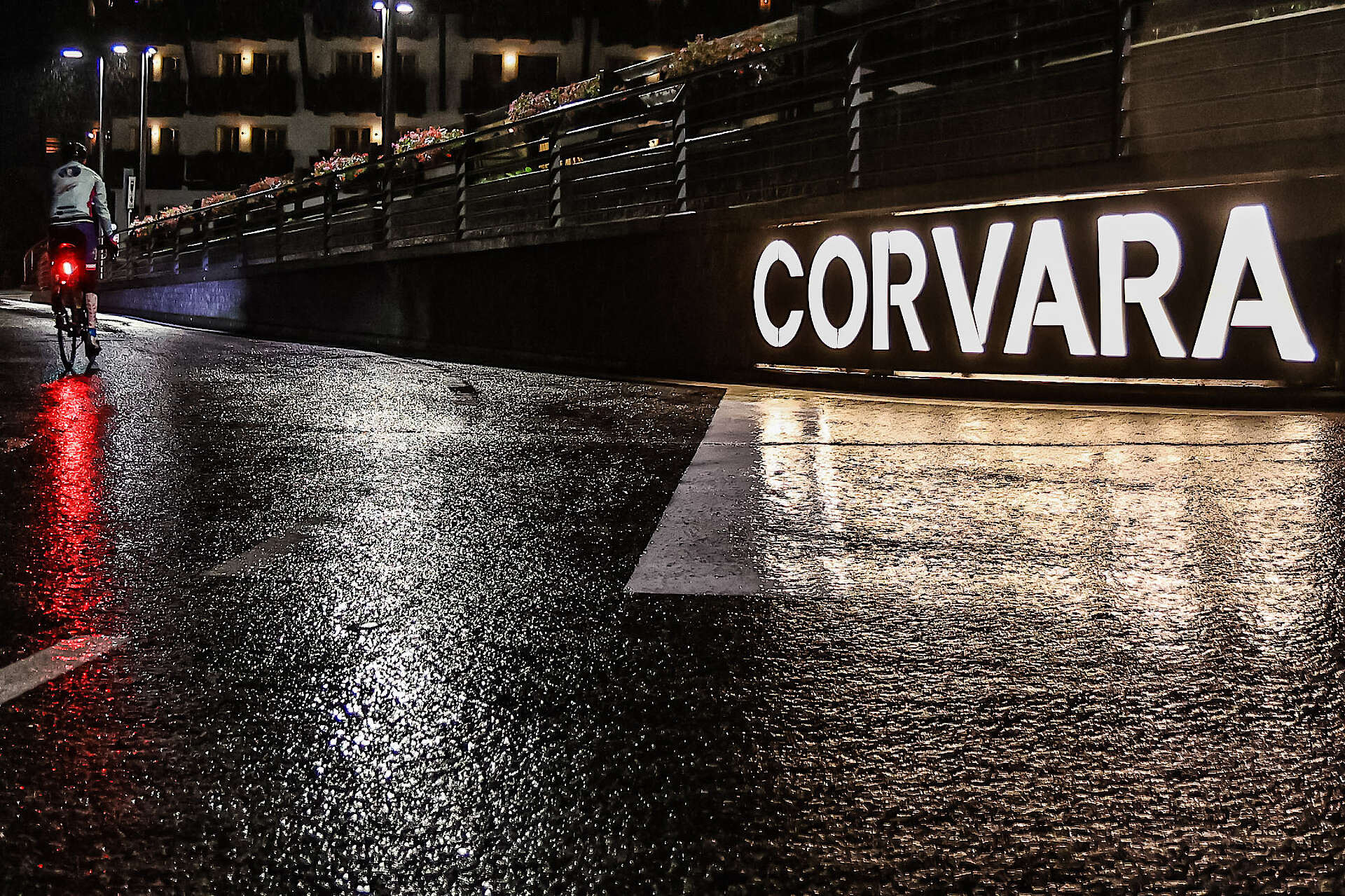 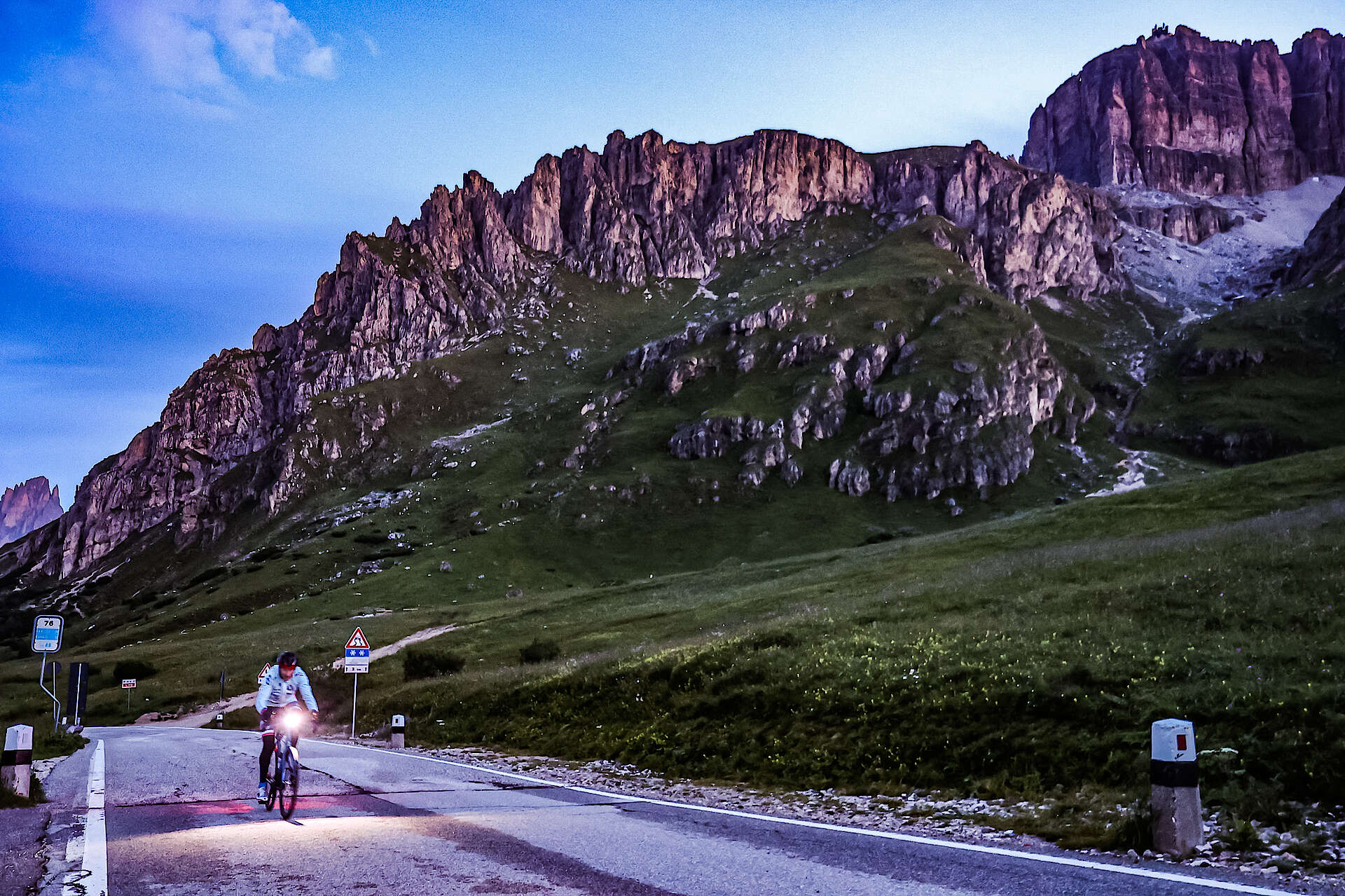 Gaby and Guido nevertheless decide to step on the gas, to make up for lost time because of the forced break. Gaby follows behind in the VW bus, illuminating the route much better than Guido's handlebar lamp would be able to. This carries him through the night. Guido is only partially aware of the magical morning atmosphere in the Dolomites when the day breaks. When he arrives on the Passo Pordoi for the fifth time at 5:24 a.m., he finds it hard to talk. "I'm totally flat, the cold has drawn the last juice out of my bones." And yet his optimism is unbroken: "I hope that the rising sun will awaken my spirits again." 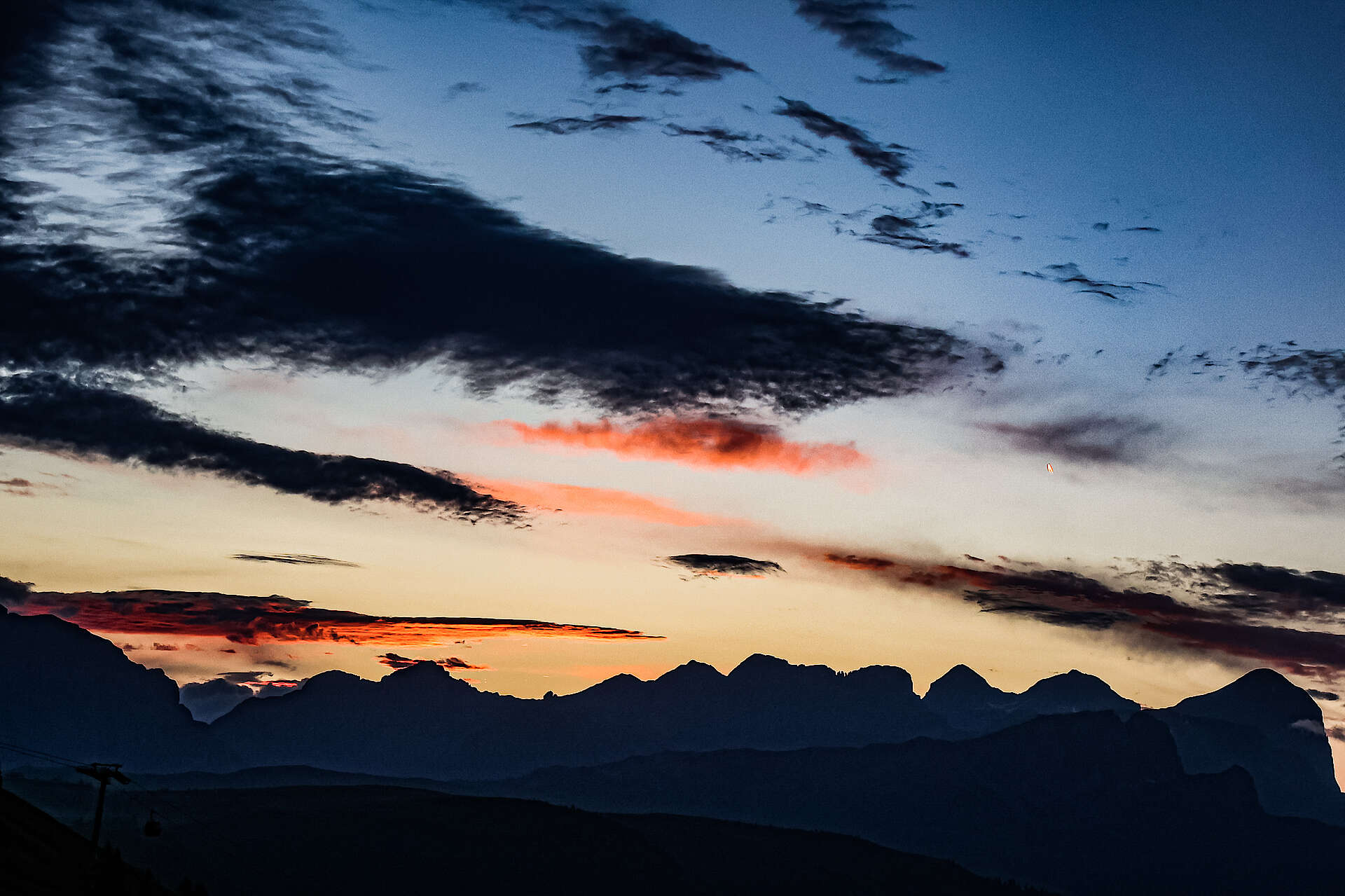 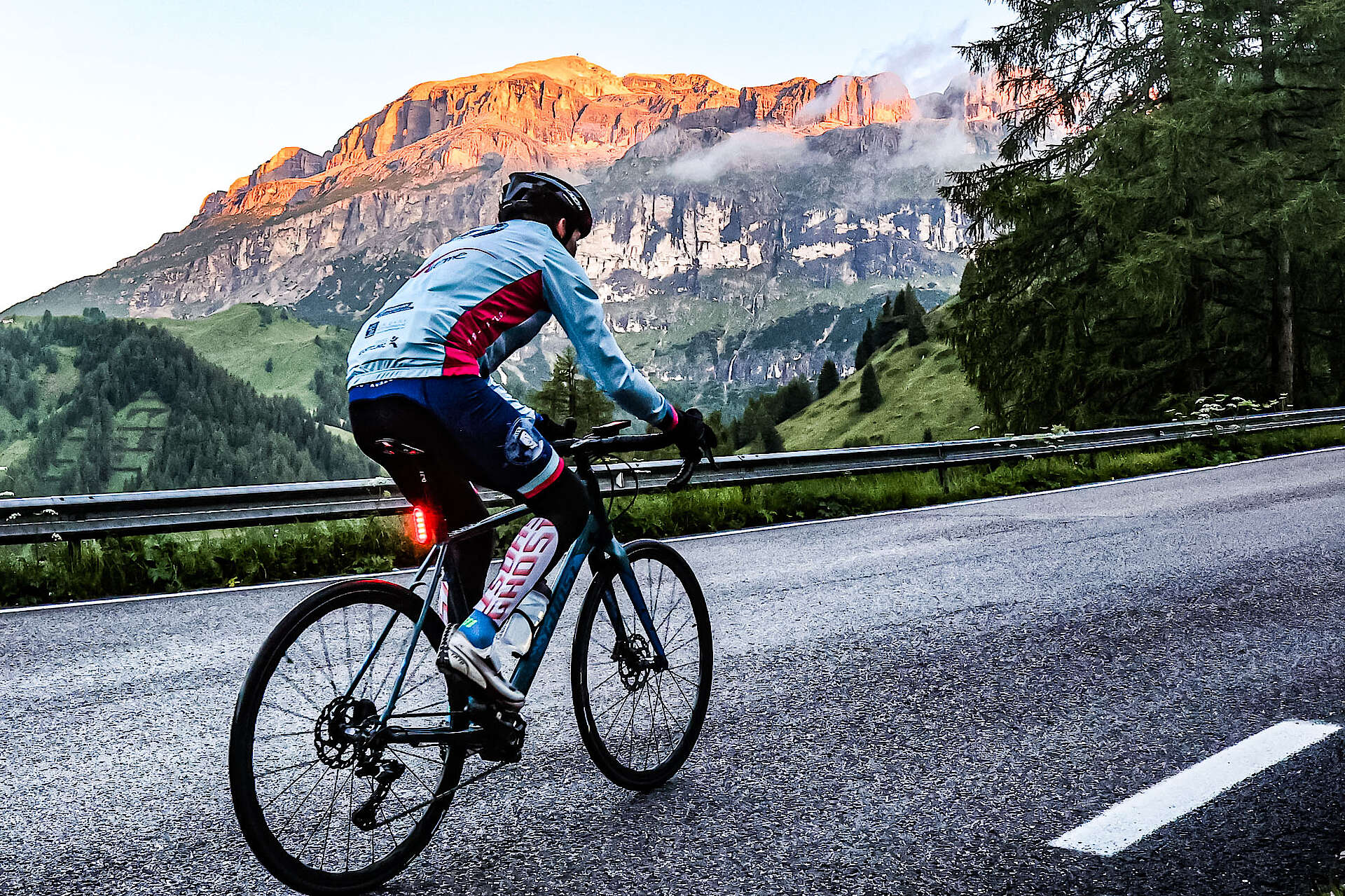 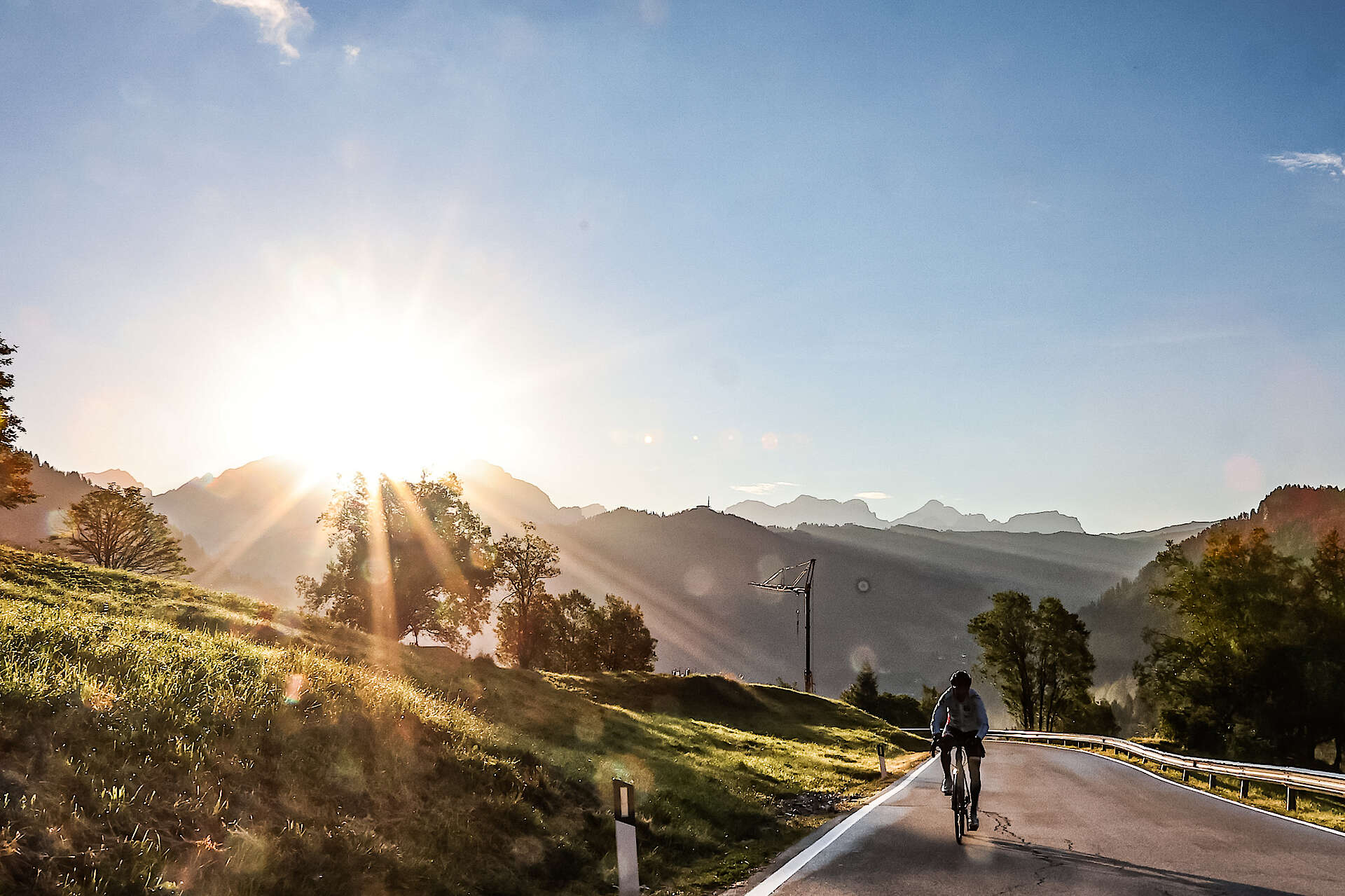 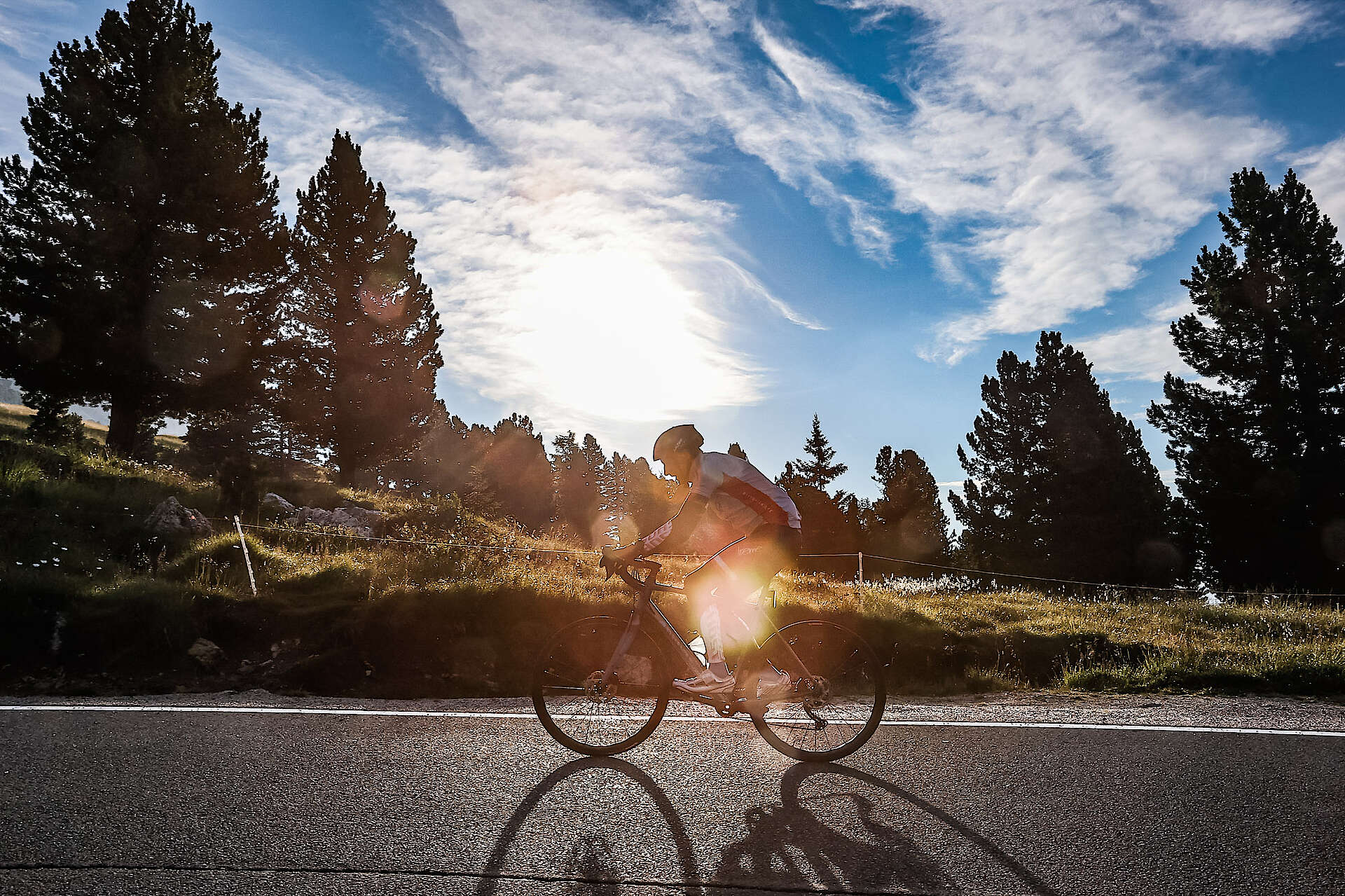 Guido also is keenly aware of the danger of this moment: "When it's daytime and suddenly warm again, you feel like you're lying in a hammock and are being tucked in." Don't get tired now. Ride another lap. Fully focused. At 9:54 a.m., he passes the Campolongo Pass for the last time. "I'm totally exhausted, but I feel good," he shouts euphorically from the bike and plunges into the last descent to Corvara. A few more meters of altitude back to the hotel. He feels the sun shining on his face. Gaby and Melvin are waiting for Guido, beaming with joy. Guido raises his fist in the air. Gets a kiss and tight hugs. "That was incredibly hard," he says happily, "The last kilometers felt as slow as molasses again." 315 kilometers are displayed on the speedometer in the end. And 9860 meters of altitude. After exactly 24 hours and 2 minutes. Will he make it into the Guinness Book of Records? That's for the committees there to decide. At the moment, he can’t even bother to think about it anyway. Guido, drying the sweat from his face, grabs the garden hose and lovingly cleans his bike thoroughly: "A good cowboy also has to look after his horse," he says and puts on his typical Guido grin. 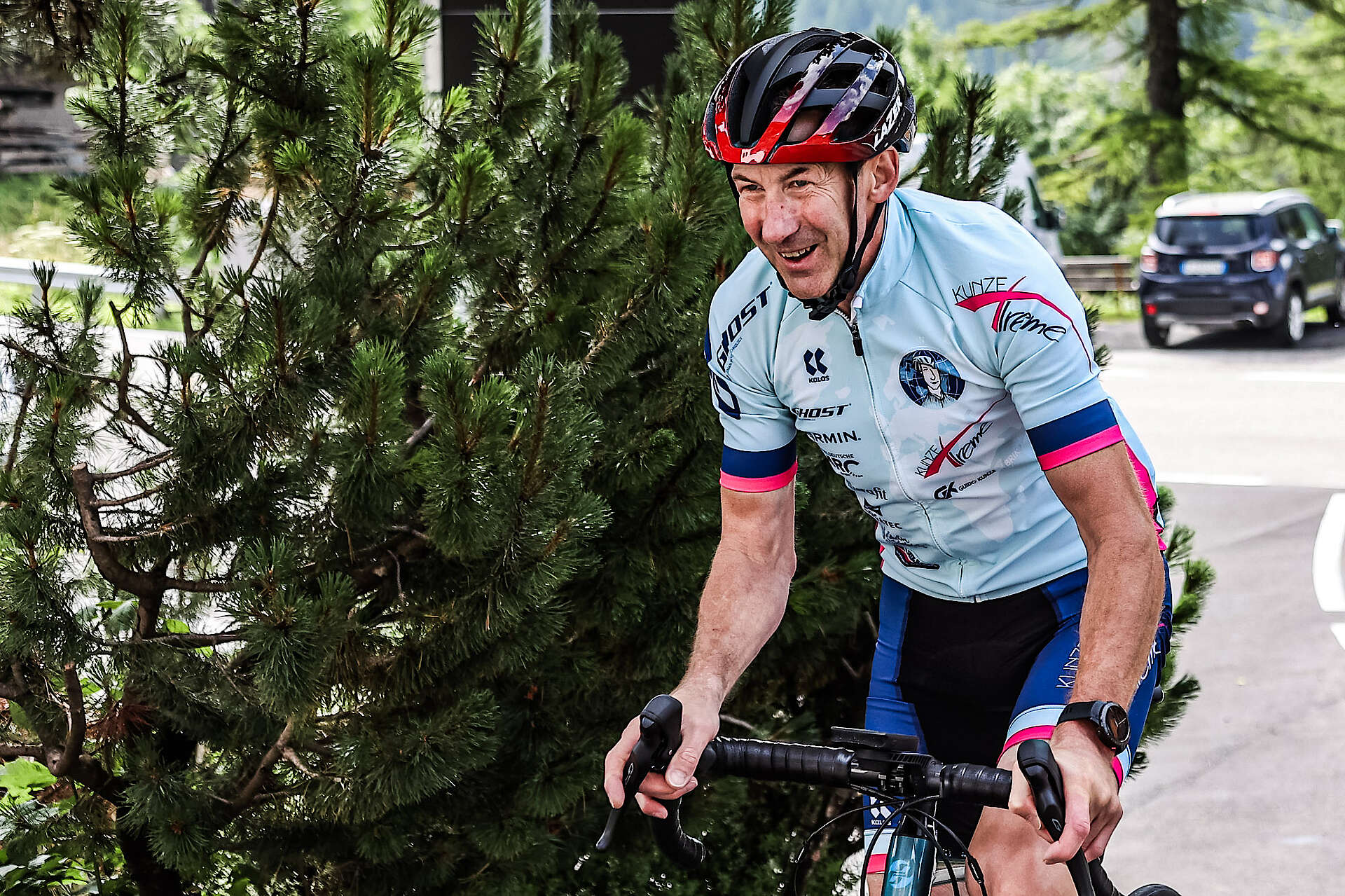 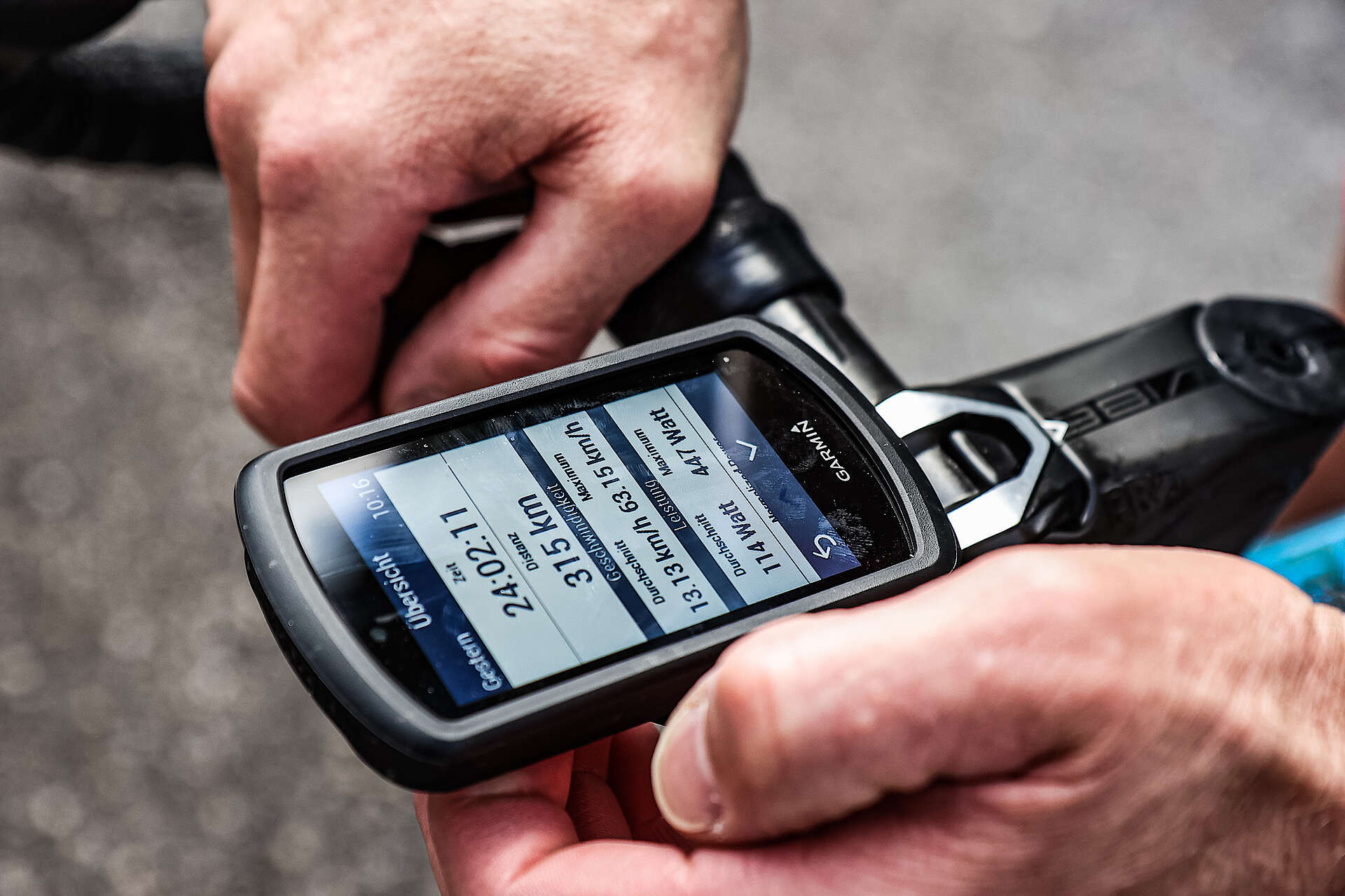 "That was quite an experience," says Guido, looking contentedly into the pleasantly warming sun as he sits with Gaby and Melvin in front of an oversized ice cream sundae an hour later. It was a memorable 24 hours that he will talk about for years to come. "My ideas," he muses, "always come to me when I'm sitting on my bike and when I have time to think about anything under the sun." It's quite possible, therefore, that the next project has already matured on the Sella Ronda. But before he reveals it, he's going to have a good night's sleep.