Globetrotter and adventurer Tobias Woggon set out with his friend Max Schumann to explore the Faroe Islands on their gravelbikes. You can read here what the boys experienced during their bike packing trip.

Together with his friend Max Schumann and photographer Philip Ruopp, Tobi Woggon set off for Faroe Islands.

The first time I heard about the Faroes was during the solar eclipse in 2005. There were only two places on earth where you could witness this natural wonder in its entirety. Spitzbergen and the Faroes. Philip was on Faroe back then to take photographs of the eclipse. When he came back, he was so taken with the islands and couldn’t wait to tell us about his trip. He was set on going back to this unknown little part of the world.

His enthusiasm was contagious. Could the Faroes be an undiscovered mountain bike spot? The travel bug got a hold of me. After seeing the first photographs, it was obvious: we had to go! The green islands, embedded in the dark North Atlantic, held an unbelievable fascination for both of us.

A true paradise in the north

I started researching immediately and realized with great disappointment that off-road biking is prohibited on Faroe. But after reading up on this topic in detail, I began to understand the situation. There are barely 50,000 people living on the islands. Most of them make their living with hard work at sea or as farmers. Very few go hiking at home. The Faroese consider their land as useful, but not as especially pretty. That’s why there are only a few hiking trails which you may use officially – by foot only, as I said before.

A pity. But it didn’t prevent us from planning a bike trip to the Faroes. We decided to take our gravel bikes and to transverse the Faroe Islands from the Western coast to the Eastern most tip on official roads. Normally, I would prepare for such a trip with the help of Google Earth and check out the most important routes ahead of time. But there is no street view on the Faroes, only “sheep view”. You read correctly.

Sheep were equipped with a 360° camera and the images were then published on the world wide web. This funny initiative was started in 2017 by Durita Dahl Andreassen, who lives on the islands. She meant to draw Google’s attention to the forgotten small island group. And what do you know. The US corporation loved it and since then you can discover the Faroe Islands on sheep back via Google Street View. Give it a go! 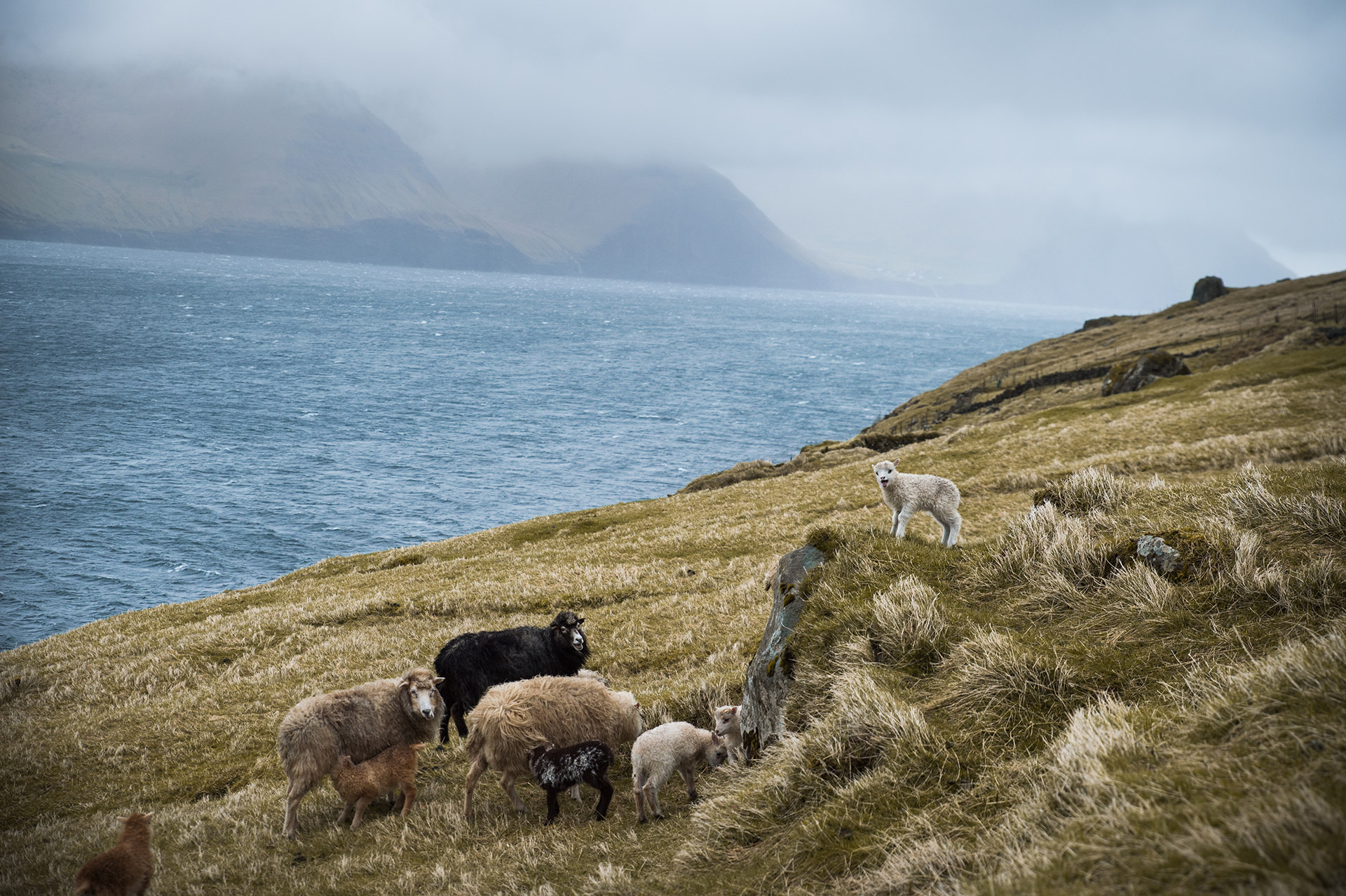 Got to be ready for turbulence

It’s about a two-hour-long flight from Copenhagen to the Faroe Islands. While the islands give such a calm and inconspicuous appearance looking down from the plane, we noticed and learned during the descent that appearances can be deceiving. We didn’t perceive the narrow concrete strip next to a fjord to be a runway. That, however, was exactly where the Faroese pilot brought us and the bikes down safely and skillfully.

So there we were. In the middle of the North-Atlantic Ocean, between Scotland and Iceland. It was May. Obviously, we didn’t expect to bike around in shorts. Yet, the weather conditions awaiting us as we stepped outside of the airport exit door were different than anticipated: A strong storm was battering the islands. 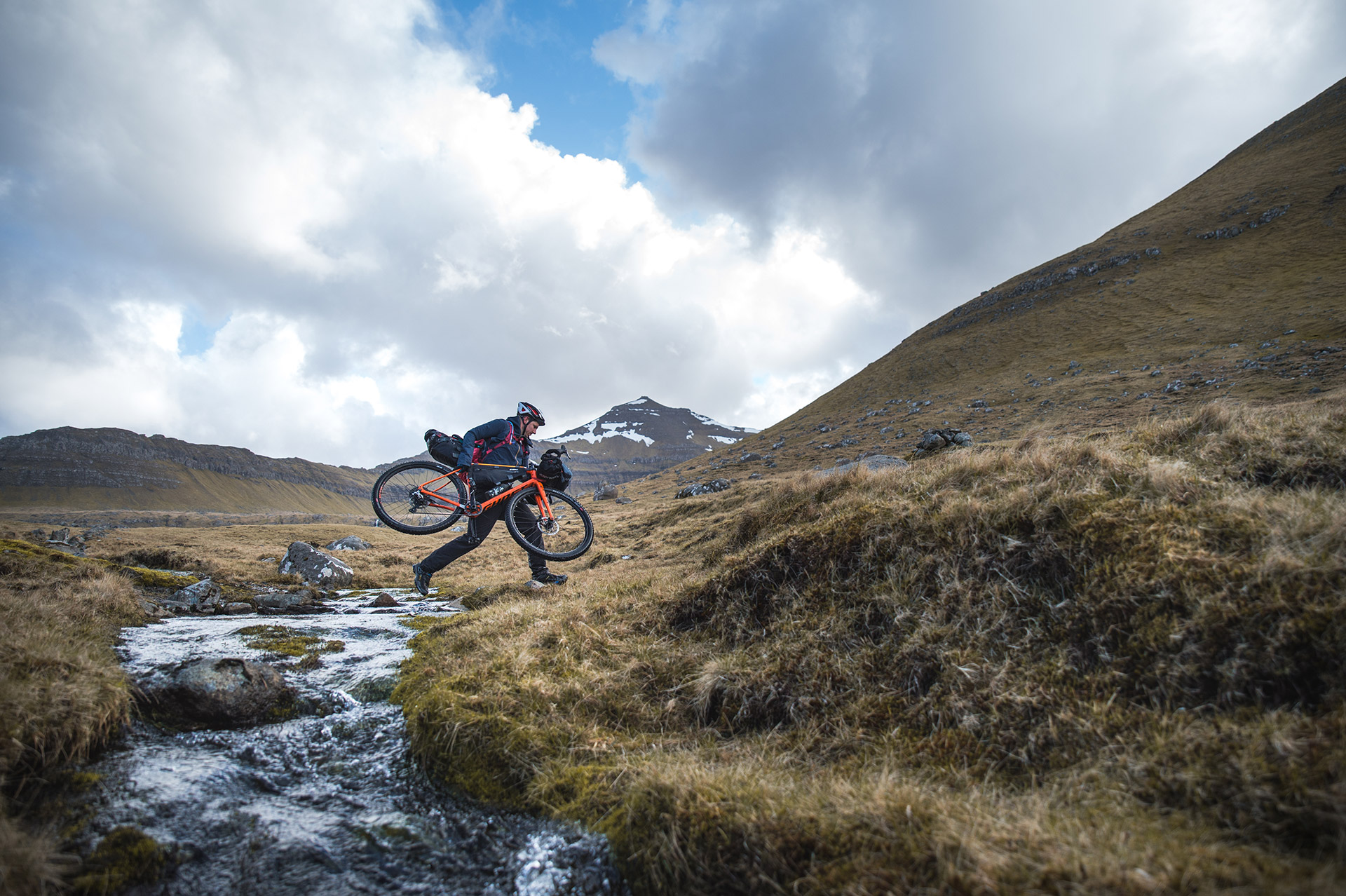 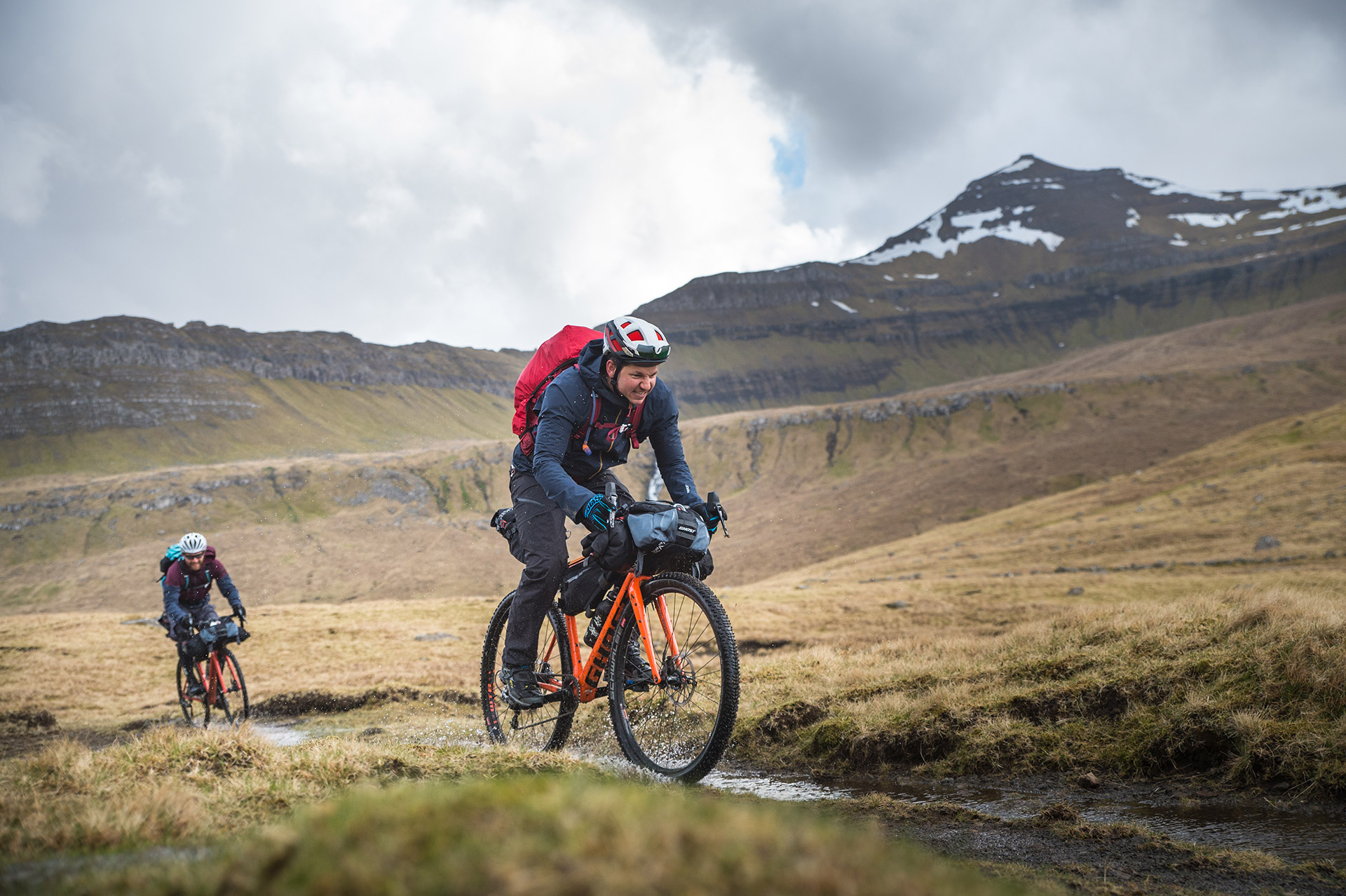 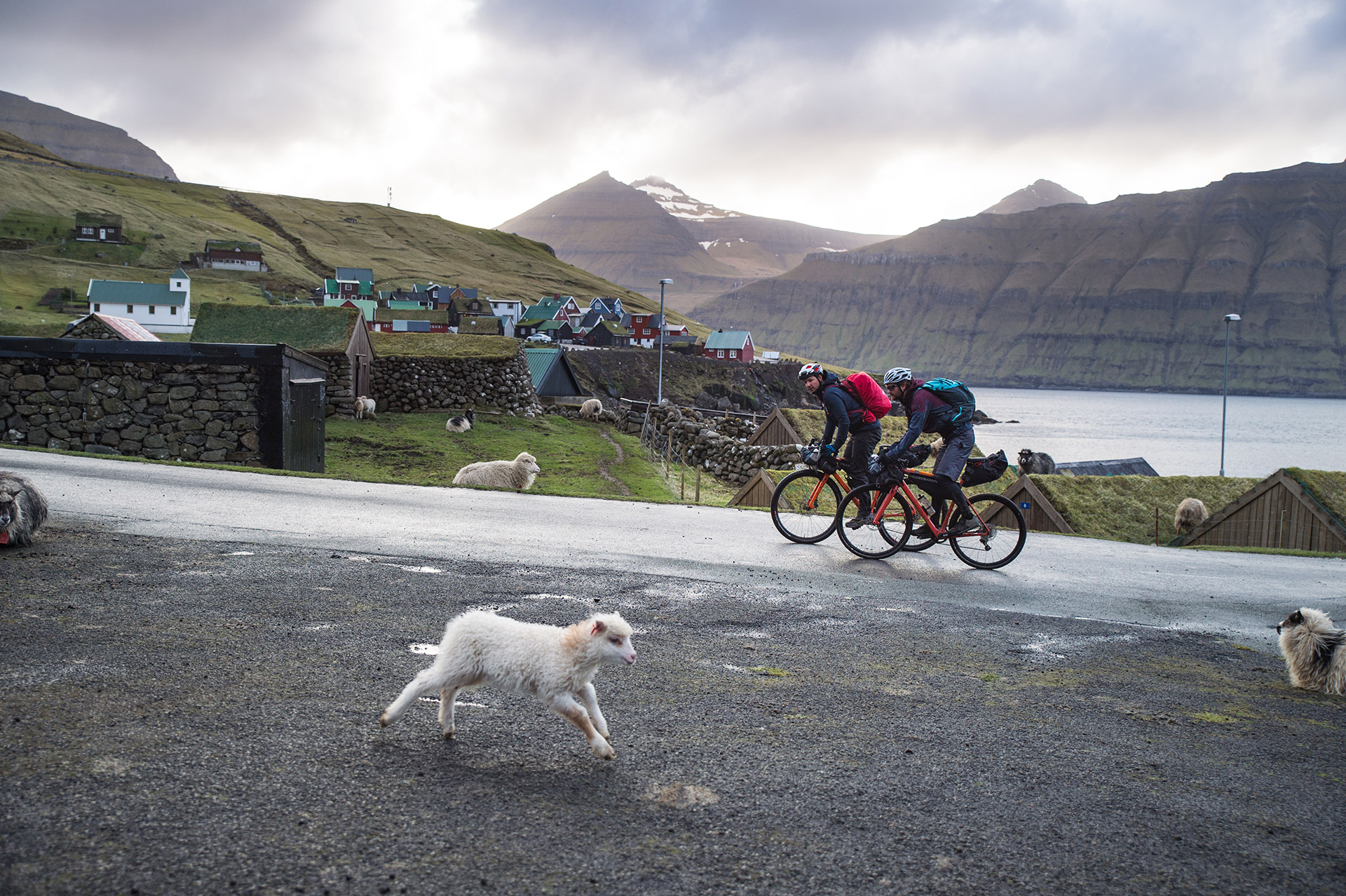 Waiting for good weather is no option

We took the bus to Klaksvik, the starting point of our route, where we spent the evening attaching bags and packs to our bikes in a way that kept them as waterproof as possible because the weather forecast for the next few days was not much better. Waiting for nicer weather was not an option. We didn’t come all this way to sit around at the hotel. So the next day, we grabbed our bikes and dared to face the wind.

The first route led us on a big loop on the road from Klaksvik in a Northerly direction all the way to the Western-most town on the islands – to Vidareidi. The wind battered our faces and rain drops felt like small waterbombs exploding painfully on our skin. A good thing that there was hardly anybody out on the roads in the Western part of the islands. The wind repeatedly got a hold of our bikes and tossed us from left to right and back.

As we exited from a tunnel just short of the little village Havannsund, we were barely able to stay put on our bikes, the wind was blowing so strong. Even breathing was difficult. Right next to us, water fell down a wall. But it never reached the ground as it would normally do; instead, it was grabbed by the wind and yanked upwards again. It almost seemed like an upside-down waterfall.

When we reached our destination for the day, we decided against spending the night in the tent. We dried our soaked through clothes in front of the warm radiator instead. The wind was supposed to stay just as strong during the next few days and not diminish, but less rain was in the forecast. A small glimmer of hope! So the next day we set off again, on our way to leave the western-most of the main islands to go to the largest island “Eysturoy”.

The Faroese have dug gigantic tunnel tubes into the Atlantic in order to connect the islands to each other. We rolled through the tunnel on our bikes. 8 km of darkness. The occasional car passed us, lighting up the black walls for a few moments before darkness engulfed us again. It was dripping from the ceiling above. Knowing that hundreds of tons of water in the fords were hovering right above our heads made us pedal harder.

As we left the tunnel after what felt like an eternity, we prepared to face what we had left behind us at the entrance to the tunnel. The opposite actually awaited us: blue sky and warm sunshine did wonders and we felt totally revitalized. That’s why we didn’t even mind pushing our bikes for a long time up the steep shoreline of Elduvik. When we got to our designated overnight spot, we were able to prepare our meal – spaghetti Carbonara out of a box – in dry conditions. We crawled into our sleeping bags totally exhausted. 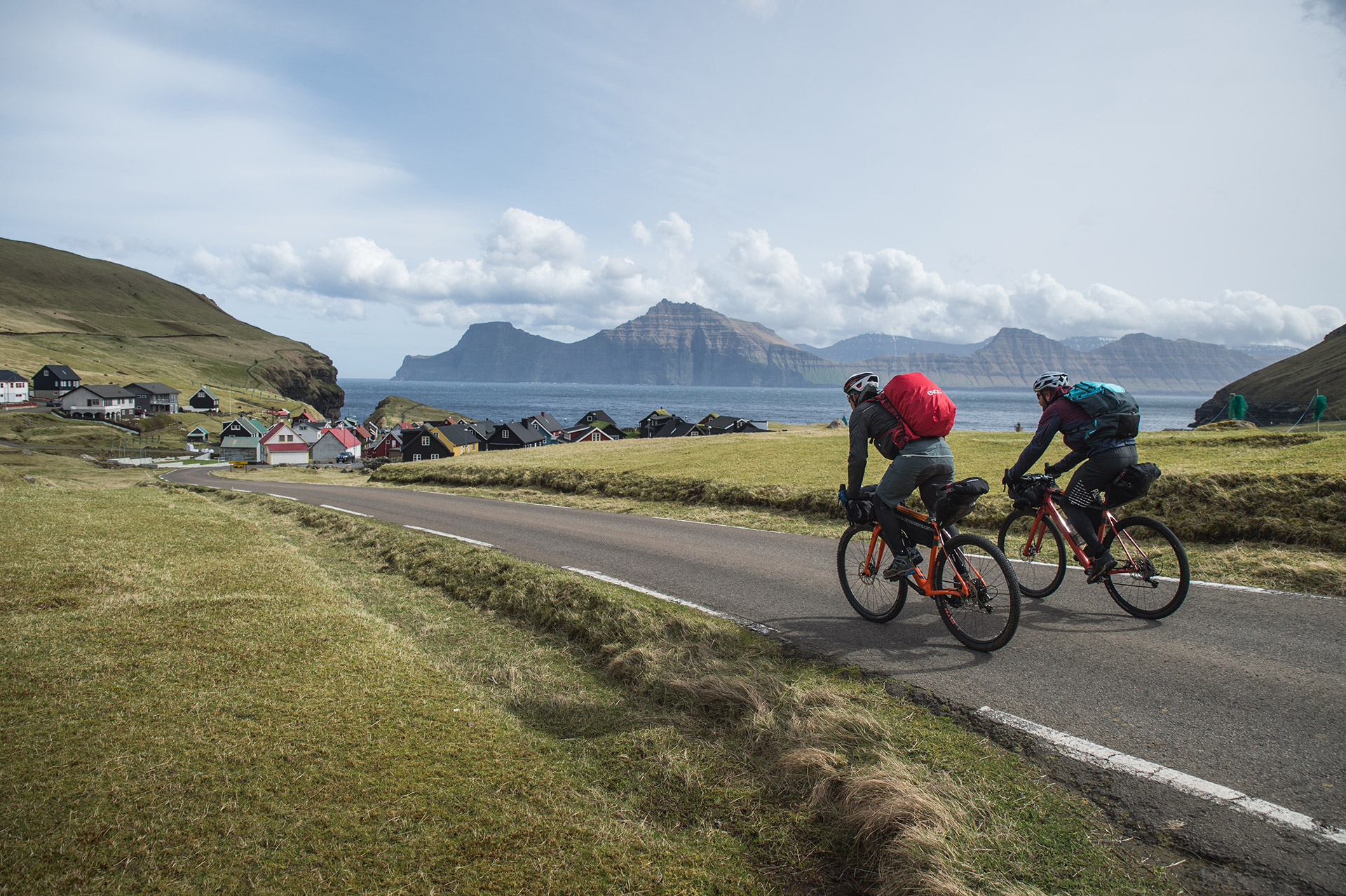 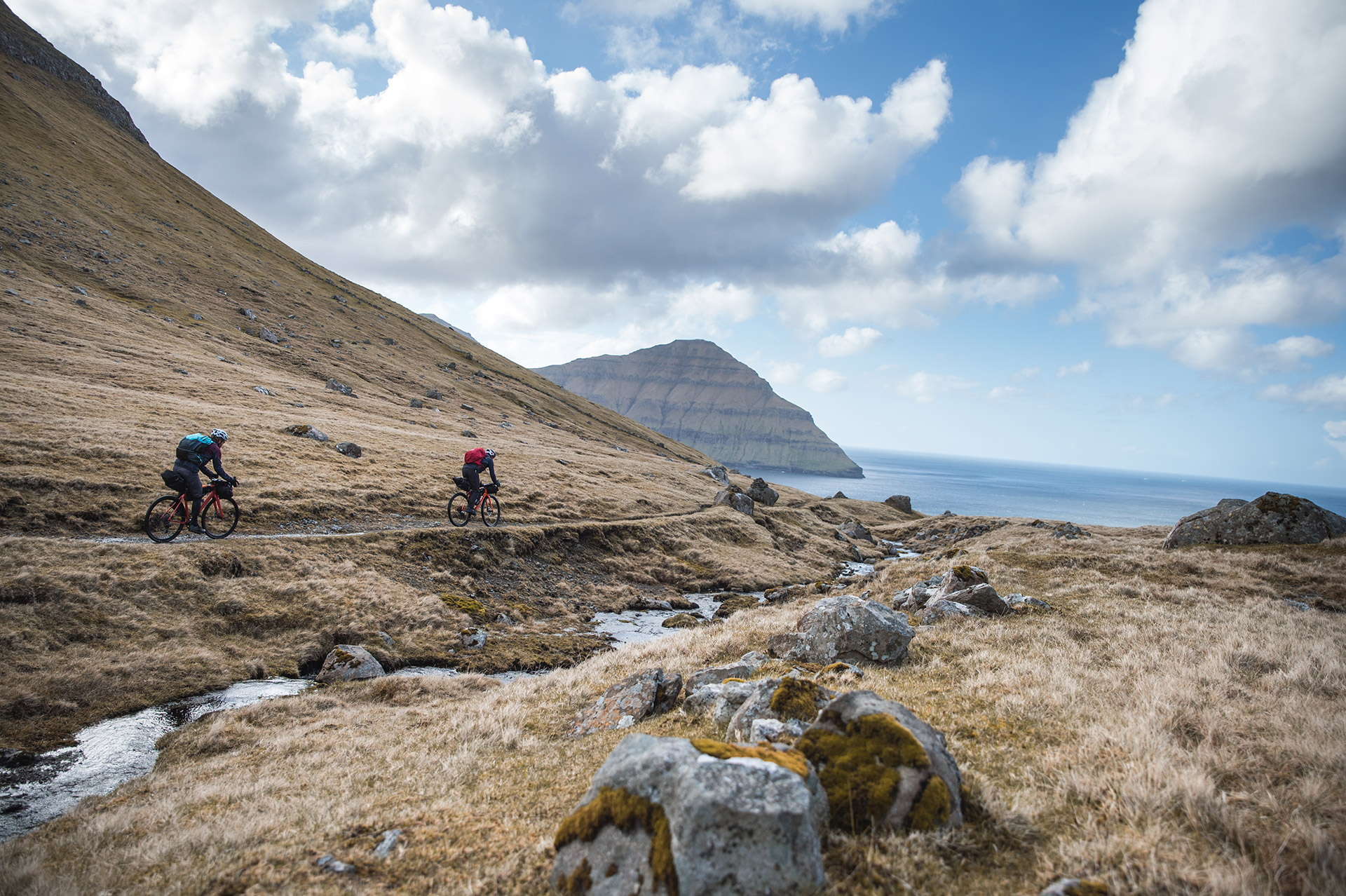 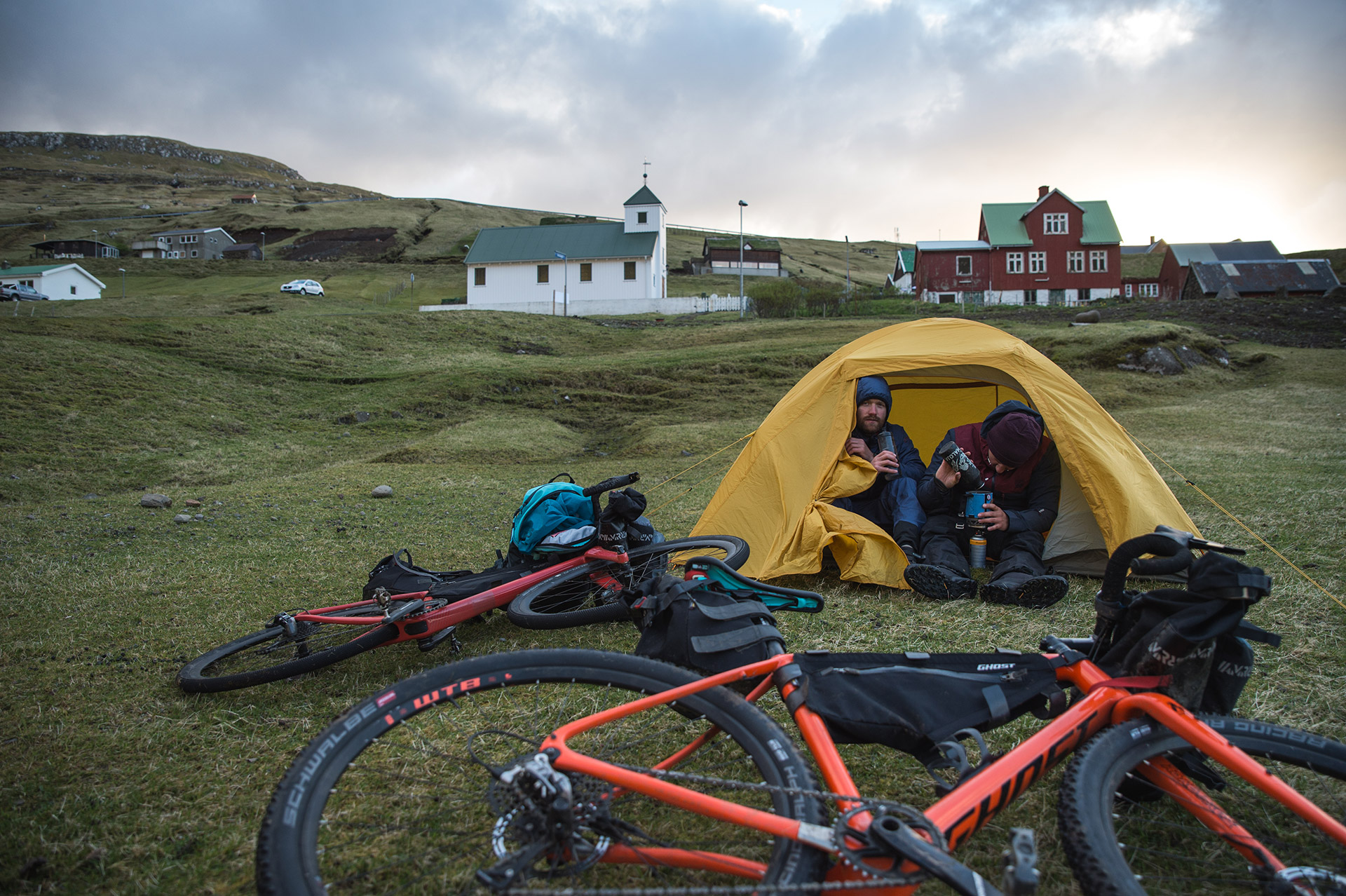 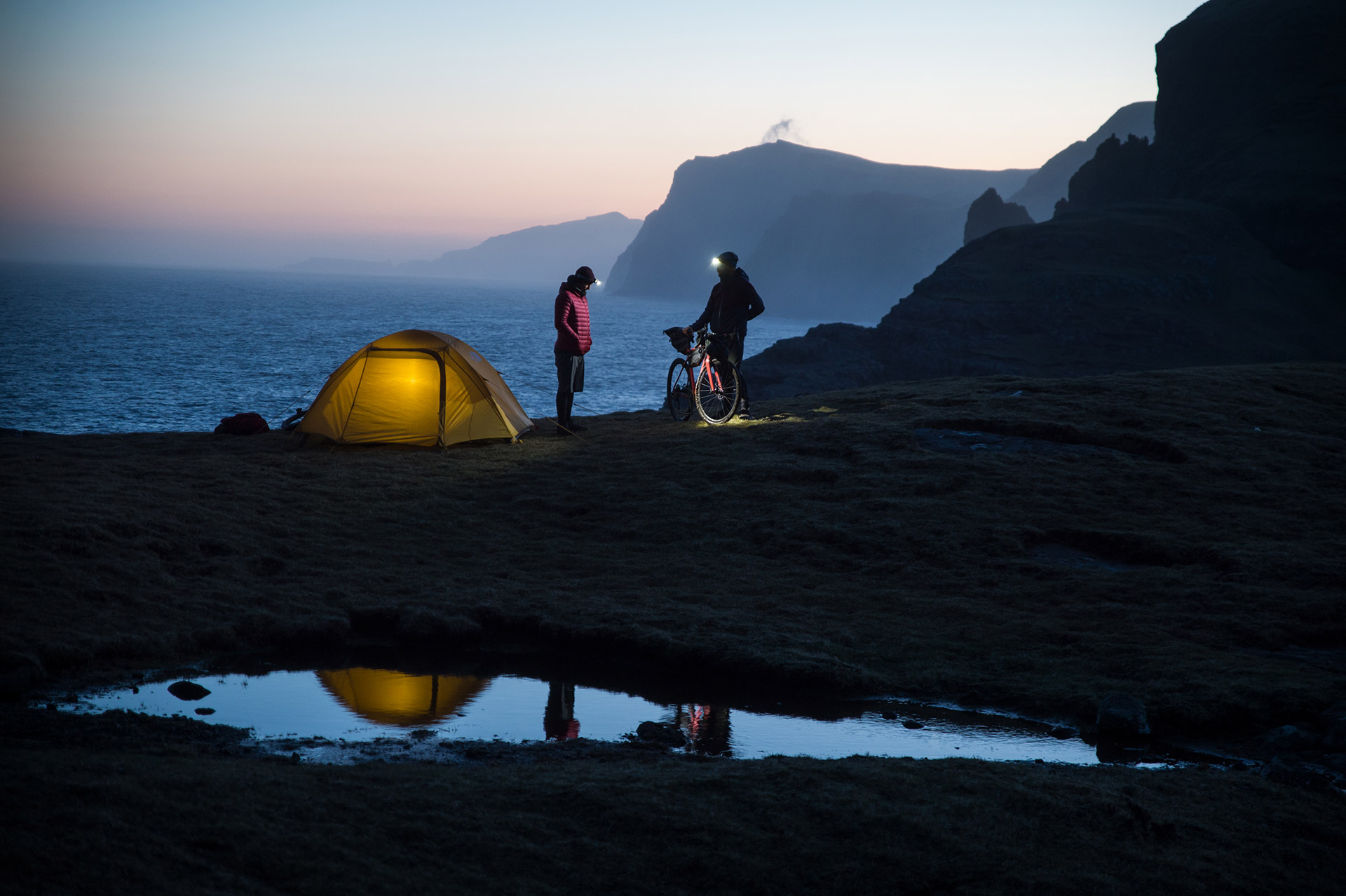 Smack. Max turned over grumbling and inched even deeper down his sleeping bag. Smack. Now I was the one who got hit. While I drowsily asked myself what had just licked my face, an absolutely soaked tent tarp hit me again. On numerous previous trips, I had made it through some seriously bad weather, but I had never feared for myself or my tent. Storm gusts wailed over us. Rain no longer pelted onto our tent, but through it. All the while, Max turned over again and kept on sleeping!

What the next day looked like for me? Imagine a day of strong headwind after a sleepless night. The salvation? A gas station at the edge of the road. We entered totally exhausted, in urgent need to refill our tanks quite literally.

All good in the end

On the last day, we crawled out of our tent into warm sunshine. The wind had died down and the clouds disappeared. So - that’s what the few summer days on the Faroes look like. Even though we had been previously beaten down by the weather: What we experienced was more than a welcome reward for our efforts.

We rolled through green valleys, water trickling down steep cliffs into the ocean. We saw the famous puffins shooting through air like little rockets, diving down into the water and flying away just as fast with a beak full of fish. The Faroe Islands just know how to showcase themselves. 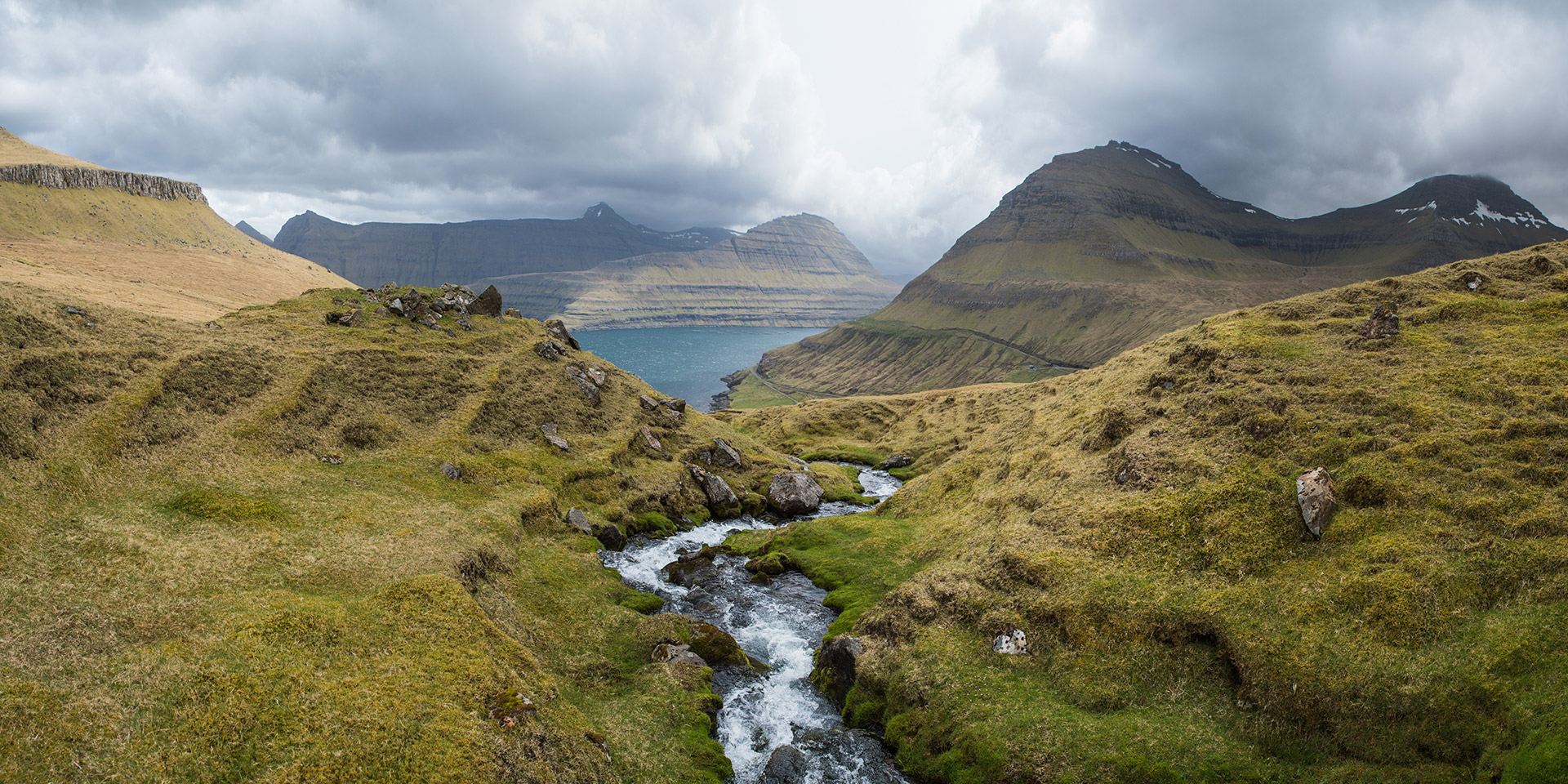 After the last tunnel of our journey, we rolled down on our bikes toward Gasadalur where the most famous waterfall of the islands can be found. Maybe you have already seen it on Instagram (#Gasadalur). The little village with the same name was basically cut off from civilization until 2005. Only after the tunnel was finished was it possible to come here by car. Before, everything had to be brought in over a tricky mountain path or by boat onto the rugged coastline. From there, unbelievably steep steps lead up to the village. Much has changed since then, except the hospitality of the people.

On the last day of our journey, we didn’t know where we should spend the night, and asked someone from the village where we could possibly pitch our tent. He invited us to put it up right in his yard. Naturally, he asked us if we like coffee in the morning. That’s the Faroes for you: wind, weather and incredible hospitality. 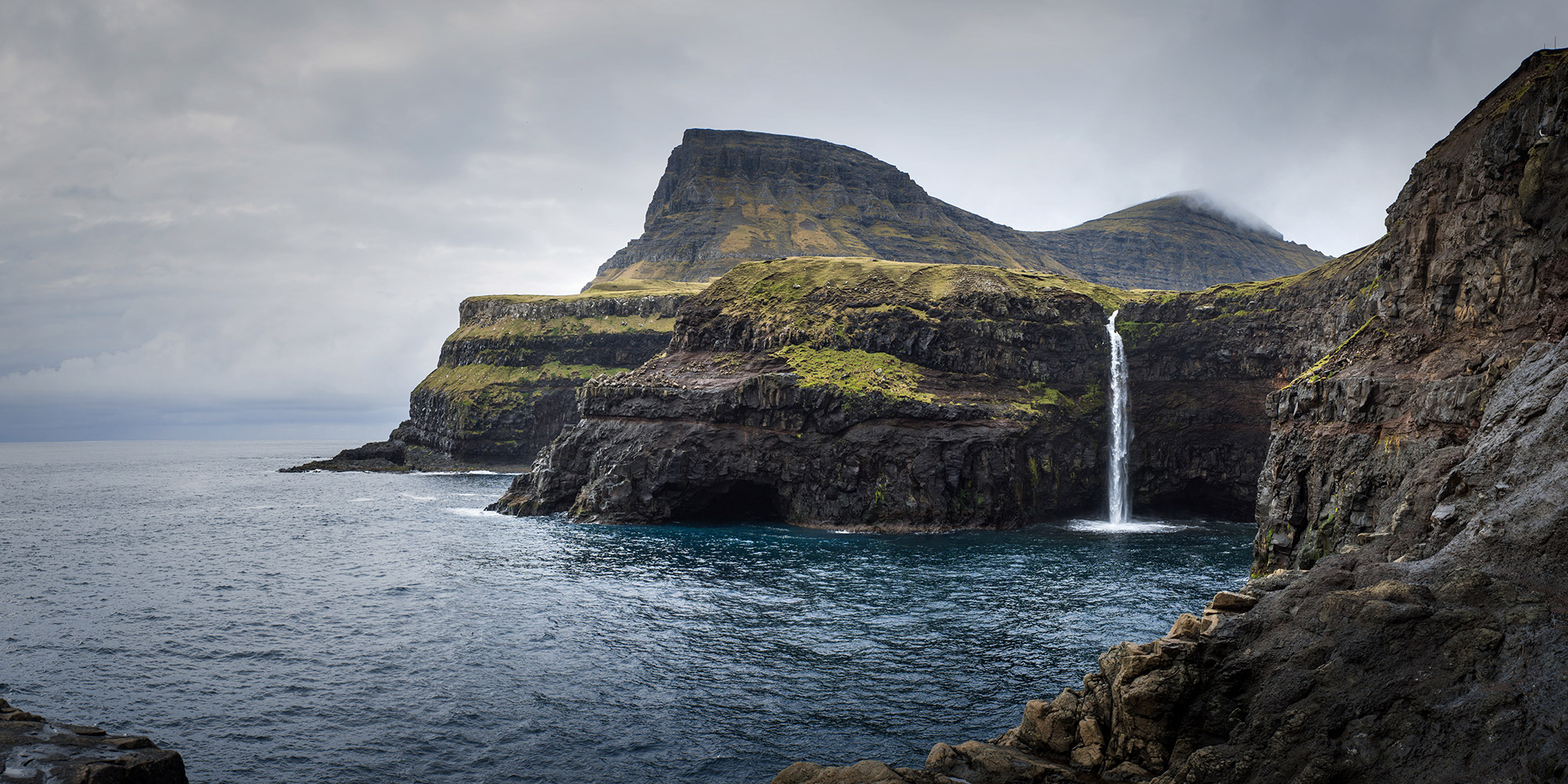 You can only fully understand these islands when you have come here. Experiencing nature is just overwhelming and completely unpredictable. But when you forget about the cold, lack of sleep and wetness, the experience of a bike-packing trip on the Faroes becomes unforgettable. To me, the Faroes belong among the most beautiful places I have ever been.