Tom Wickles, our Factory Racing team manager, is addicted to colors. And to extra-ordinary bike builds.
So he decided to build his very own interpretation of our LECTOR full suspension. Enjoy the geeky details.

This is Tom’s new toy. After building last year’s LECTOR SuperFit hardtail, the time had come to start all over again with the latest addition to GHOST’s stable, the LECTOR SuperFit full suspension. Two years ago, whilst driving on the German highway he passed a foil-coated BMW. It would be the seed for what was to come. A chrome plated unicorn was finally born in April 2021.

The goal of the project was to create his very own dream XC full suspension bike. Mainstream is not Tom’s thing. Color is, should you not have noticed by now. And pulling off a surprise or two on the bike, as a wannabe athlete among World Cup athletes is worth some effort. 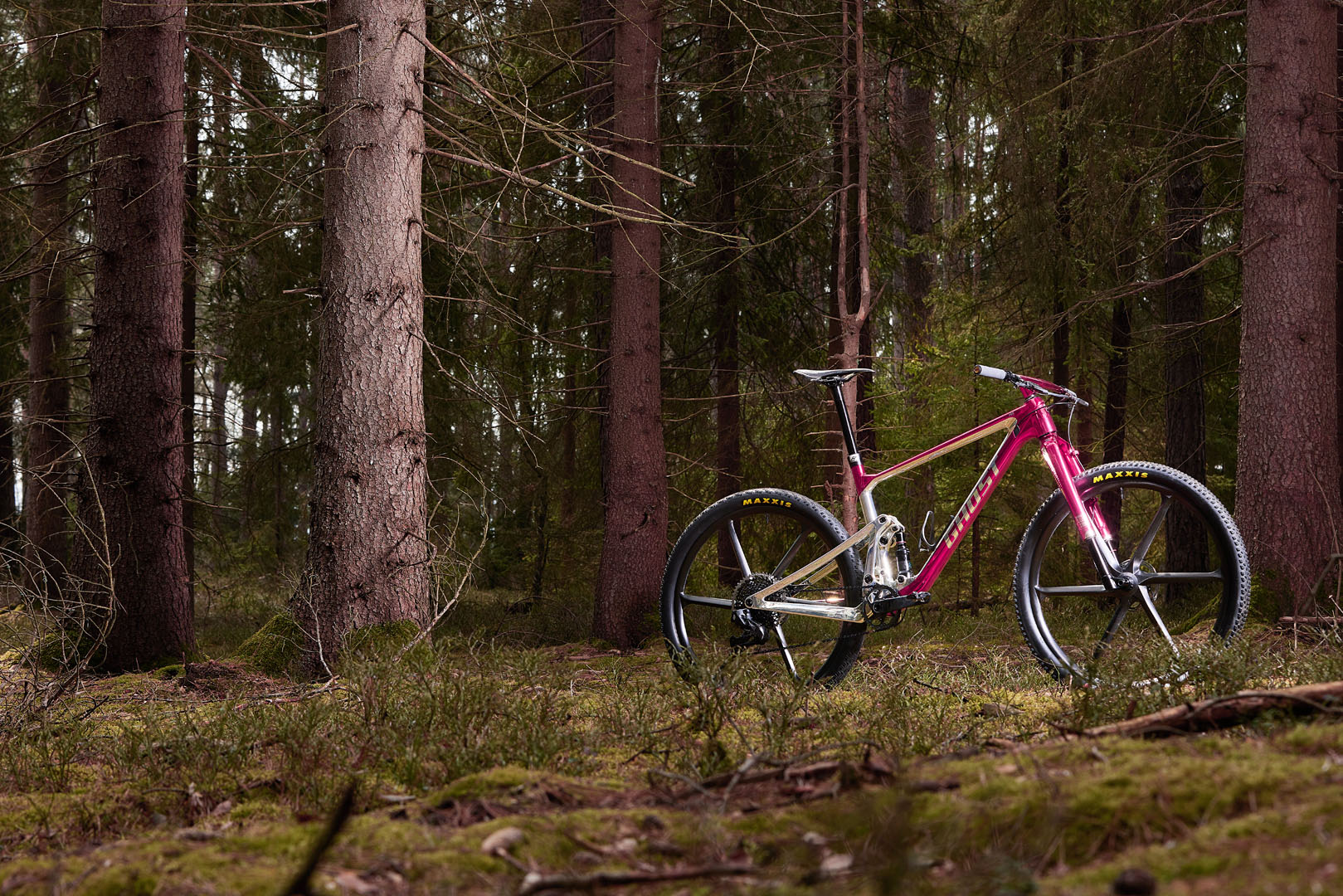 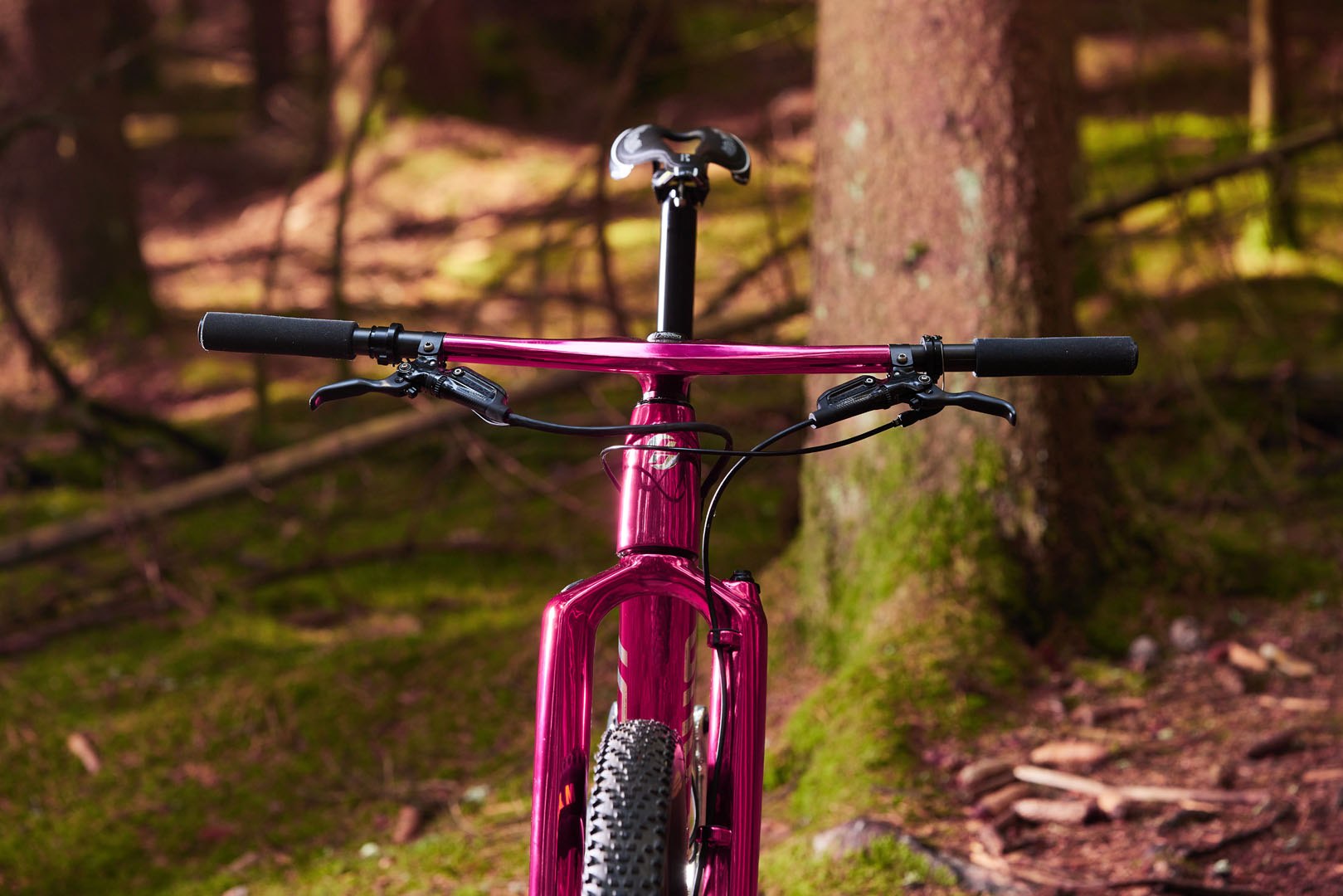 Tom Wickles about his bike: “The design is reminiscent of the first hardtail which some people might have seen already. My taste hasn’t changed that much since. After using two SRAM Blips and the very clean cockpit, I was looking for a more ergonomic solution. I am still riding the hardtail and apart from a cable break at a solder joint it has never given me any trouble. It has several thousand kilometers on the clock and the paint still looks great even though there are a few scratches and chips due to the not so tender use. But technically, it still operates as flawlessly as it did on day one.

Nevertheless, I wanted to try something new. I kept thinking an AXS shifter would actually have to look like an E7000 Steps E-Bike shifter, but since I am not an electrician the option to build something like that was not going to happen. At some point I came across the Zirbel Twister, which work with the Blipbox and I got that much desired clean look back. They work great, are intuitive and clean up the handlebar. The cables (just 2) and the brake cable head into the frame where the Blipbox, wrapped in foam, is clamped behind the headtube. Not great for fine-tuning shifting and for battery changes, but at least really clean. There are also Zirbel for the Reverb AXS for Links, but I think the look of 8-Pins is just phenomenal and that’s why I went with the extra cable on the bike. So, I went on a search for a lever that looks similar to the shifter. I am not totally satisfied with the result quite yet – anyone have a better idea? The cable down the brake definitely doesn’t work, a similar “twist” function like the shifter would be nice. That way, the cockpit would look relatively clean again, especially since I went without the suspension elements’ remote. Speaking of cockpit. You can probably guess where that comes from and what that means going forward. I personally find the color integration ingenious. 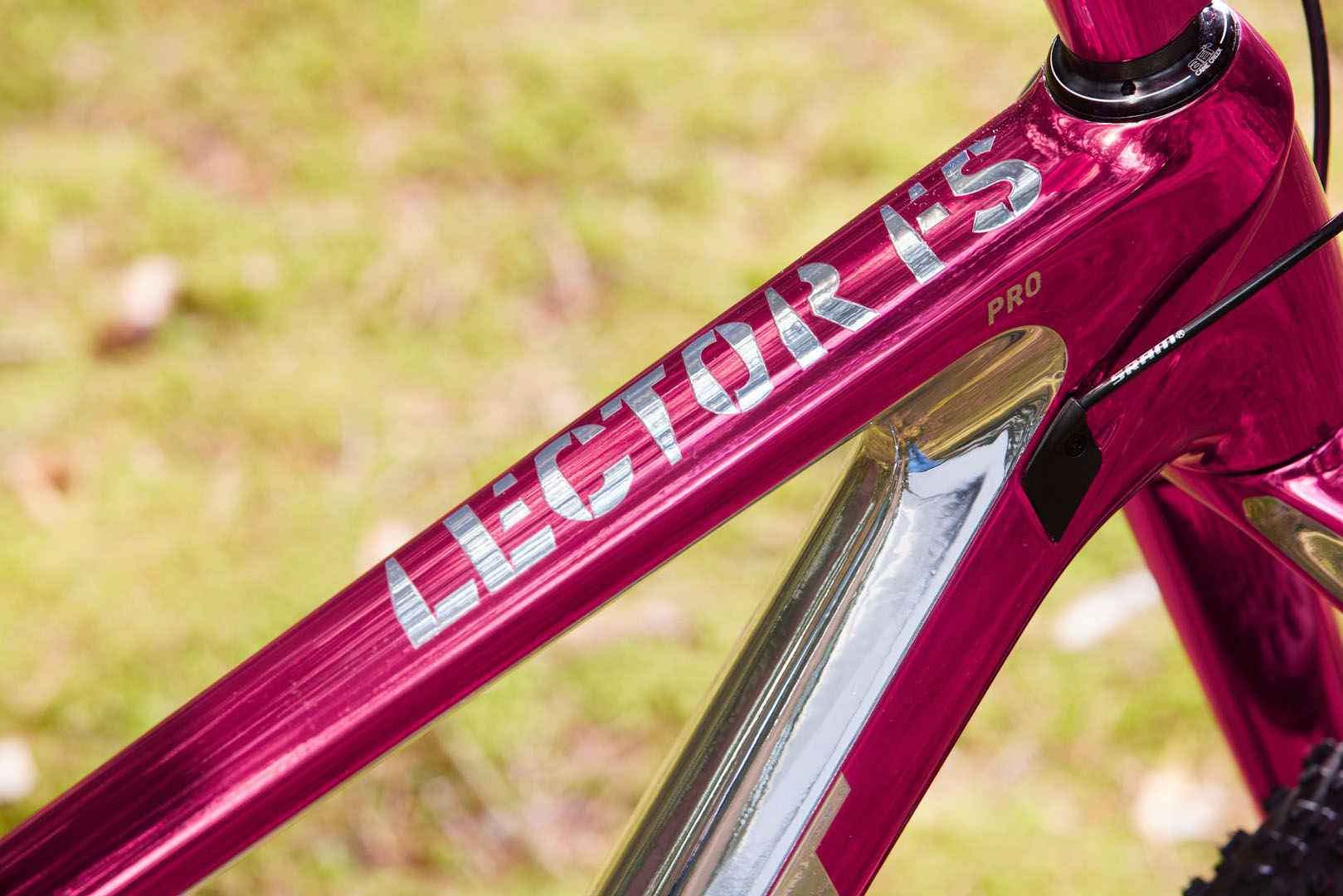 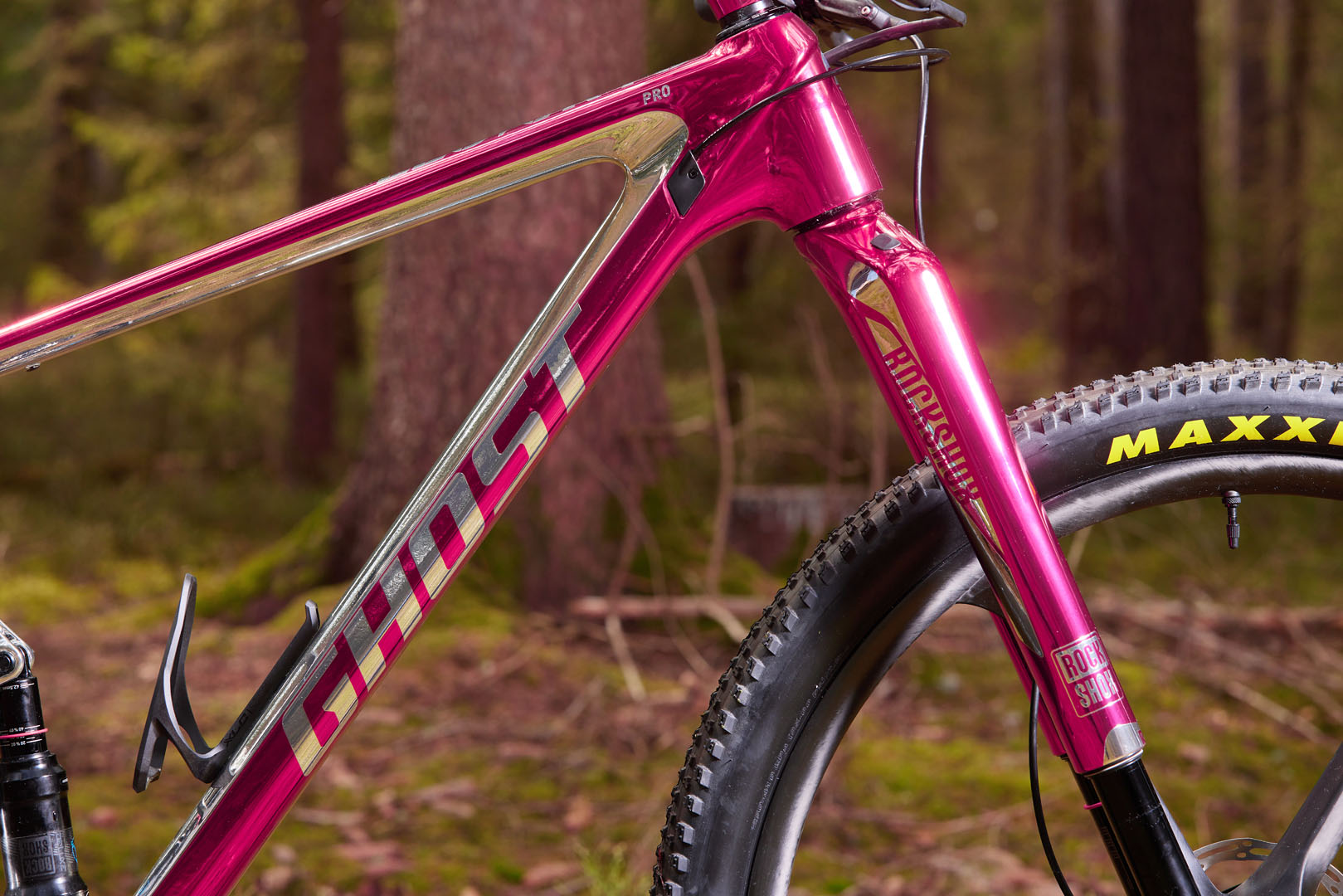 To find a RS1 without remote was not that easy. But why an old RS1 at all? Well, look at the result. A few years ago, you were used to the look, somehow it pops today just like it did then when it first came out – at least it does for me. A clearly visual decision, performance was already awesome back then. There are safer, stiffer forks, but the Biturbos compensate for that. In terms of the shock, I should have listened to our R&D: they told me that “only the SID shock fits”. This shock works great, but was only available with remote. That’s why I decided otherwise, just to realize that the valve was hitting the frame. To sand down the paint was not an option, so I shortened the valve and the valve core. Not recommended, especially because tuning only works with a tuning pump when it has been disassembled. But I assume that this will not be necessary every day. 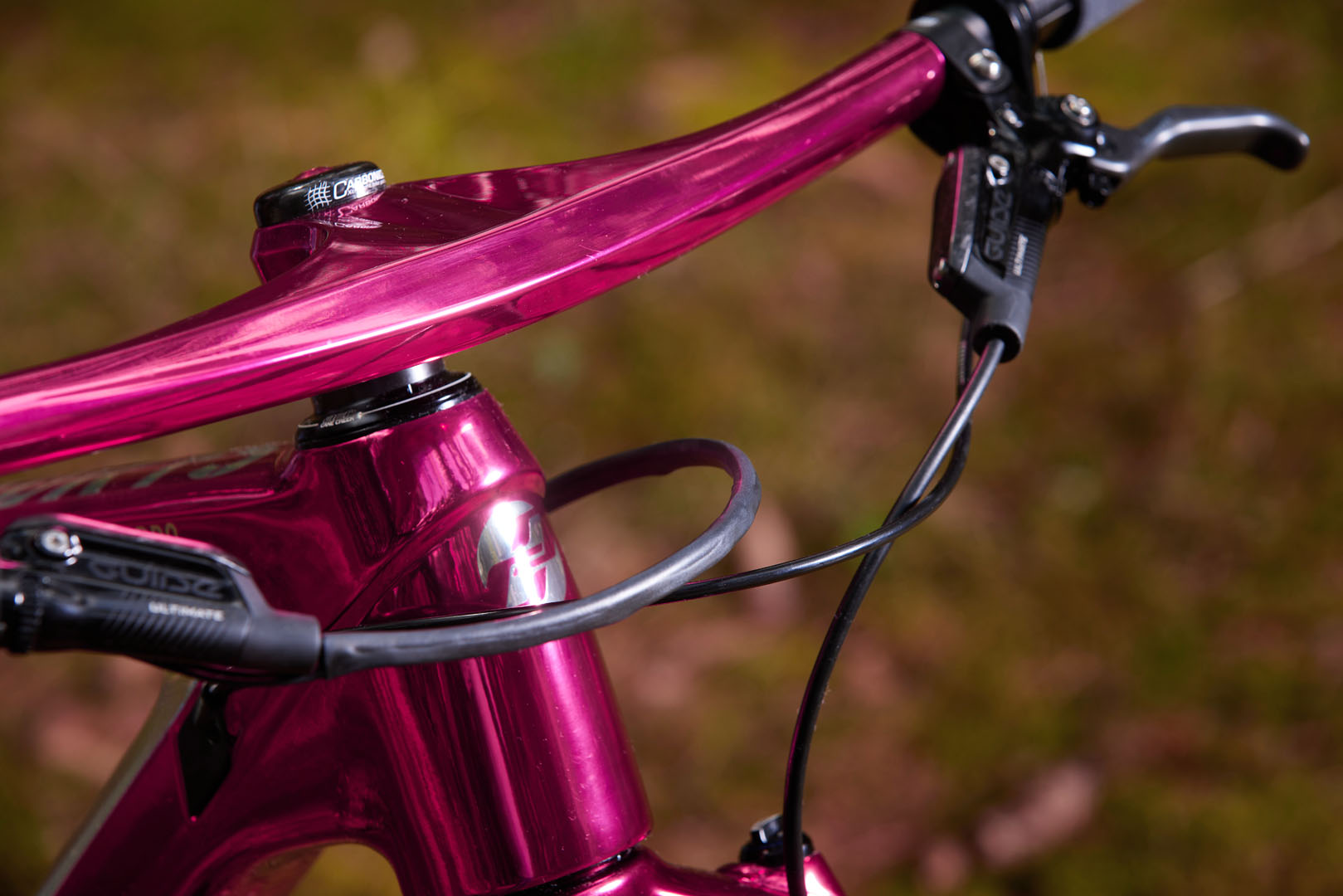 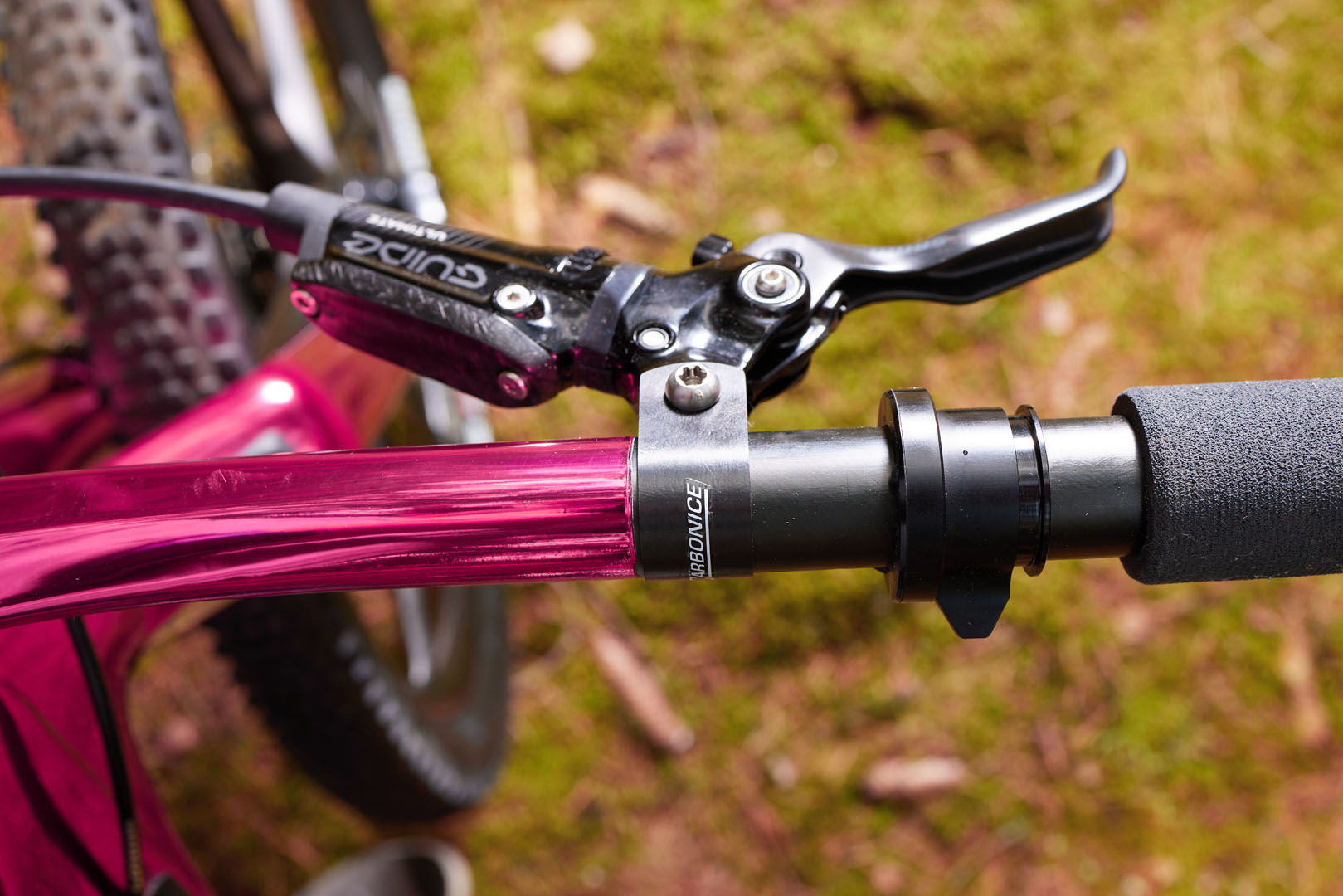 Other than that, the bike did not need more color, black drive, black Candys (but I really feel like installing gold axles), the black SLR Tekno Flow from Selle Italia, black XLC bottle cage (my personal favorite!) and black ESI grips (Racers Edge with a specially machined surface). Anything else special? The brakes are Guide Ultimate levers combined with Level brake calipers. The braking power of the XC brakes is plenty sufficient, but I find the tool-free pressure point adjustment of the levers ingenious. The HOPP covers are just sleek and beautiful. The levers are clamped with minimalist carbon clamps – works amazingly well! A personal highlight is the rear derailleur, also by HOPP carbon parts – at least the upgrade. Weight is not a major factor on my bike, but there is hardly anything more customized with as much attention to detail as tuning an AXS rear derailleur. Works just as perfectly as the original. 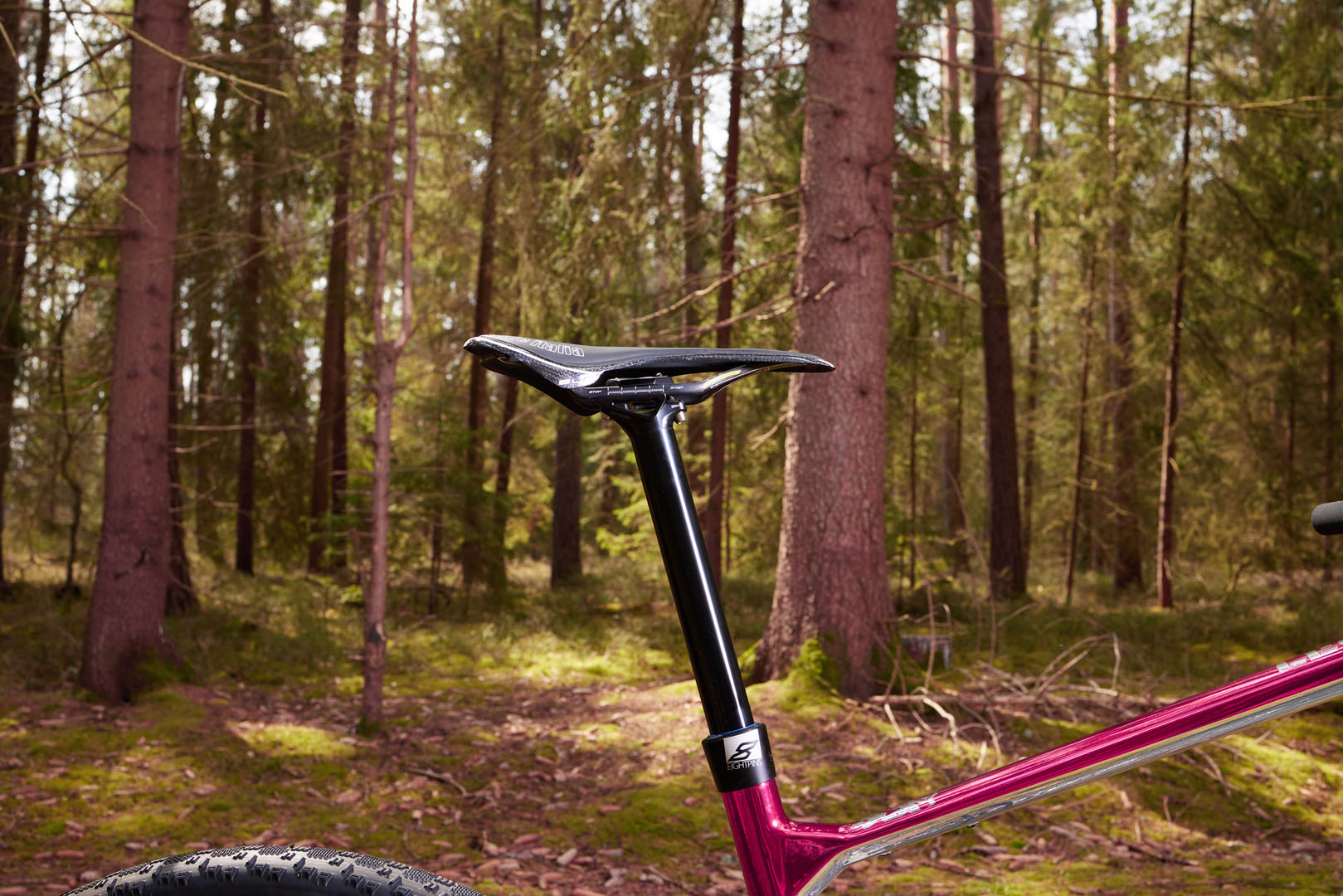 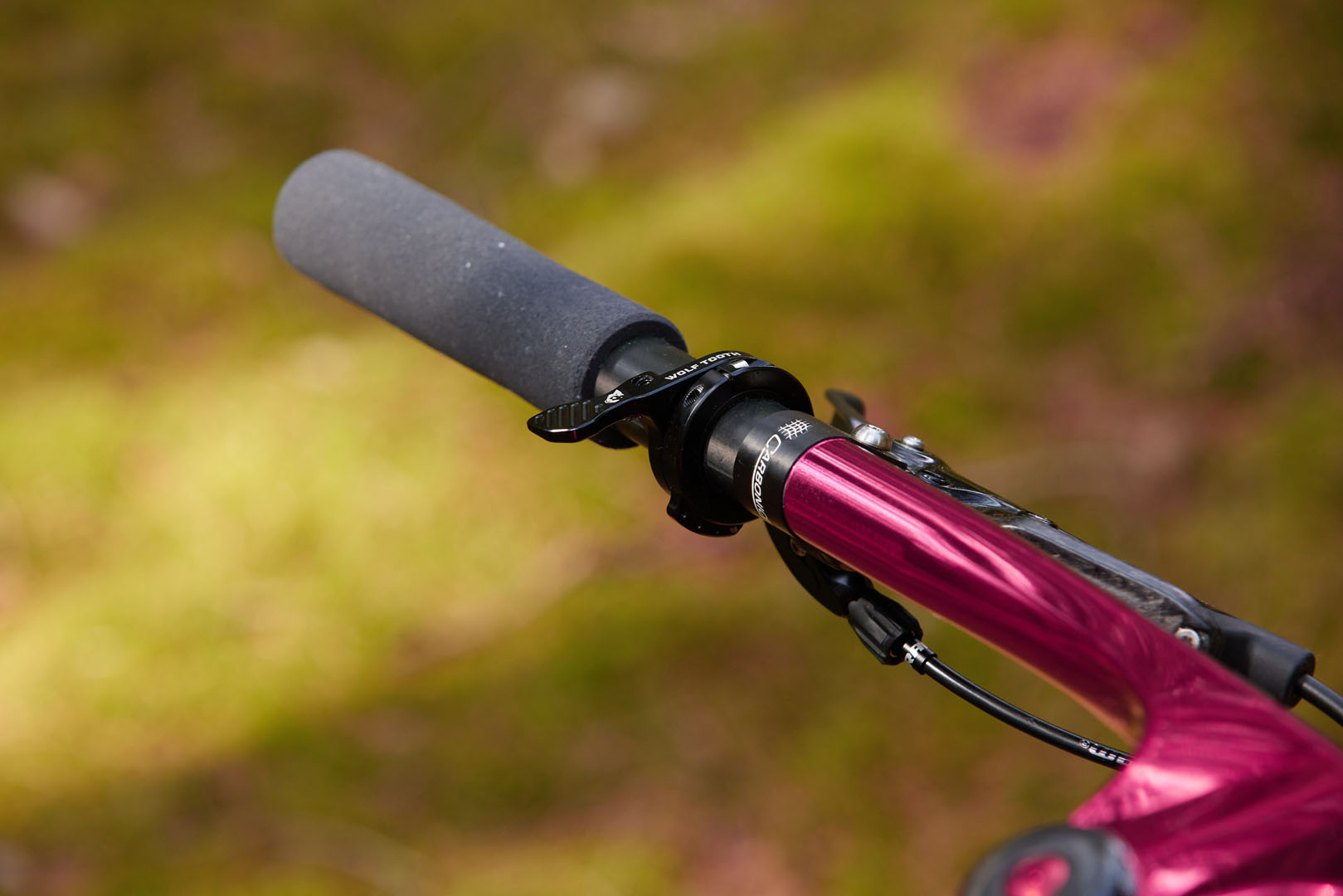 The wheels are standard Biturbos, which the team has used for about a year now. I can attest to the durability of the hardtail for quite some time now and I can also say I did not take it easy. The same applies for our ladies, not a single defect to report. We combine them with Pepi’s Tire Noodle in pink which provides good protection for the rim flange, but still leaves an air cushion and thus reduces rolling resistance. Same here. The tires are Maxxis Rekon Race and Aspen ST incl. 2.35/2.4, the same standard width as in serial production.

And the seat post? Conspicuously inconspicuous with a lot of stroke (I didn’t measure, but virtually the entire post is retractable) and great performance. Very little operating force is required and it functions perfectly as it should. In addition, it also looks very clean and tidy, and also elegant. 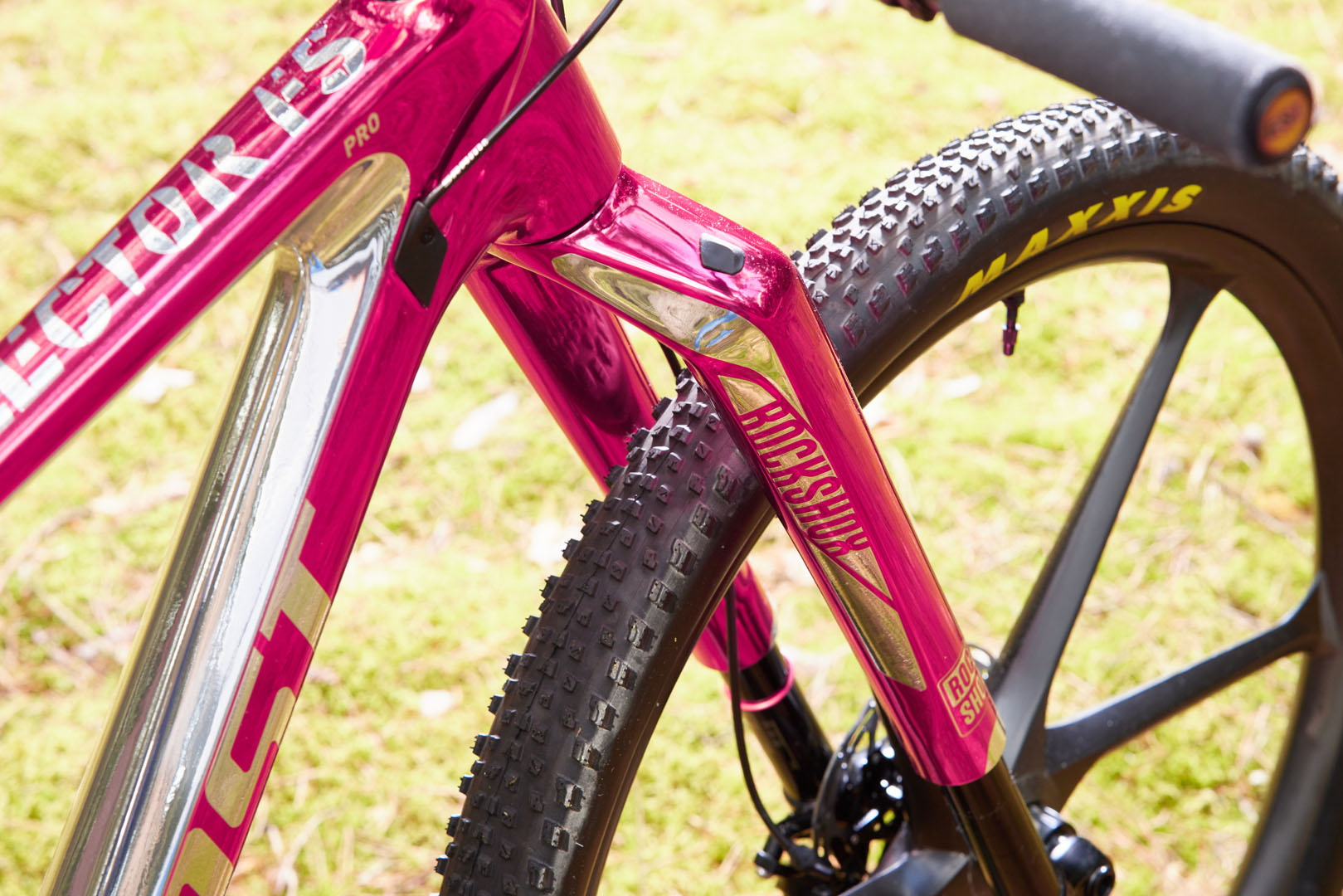 My name is Tom Wickles and I am the team manger of the GHOST Factory Racing Team. I also competed in XC races, marathons, enduro races and occasionally on the road for many years. When I reached my personal limit, I was fine to quit. The passion for XC sport has certainly remained the same, however, and about 10 years ago, I had the chance to turn my hobby into my career and landed in my current job after many years in a bike store and after graduating with a business degree. It allows me to still be very close to the sport. 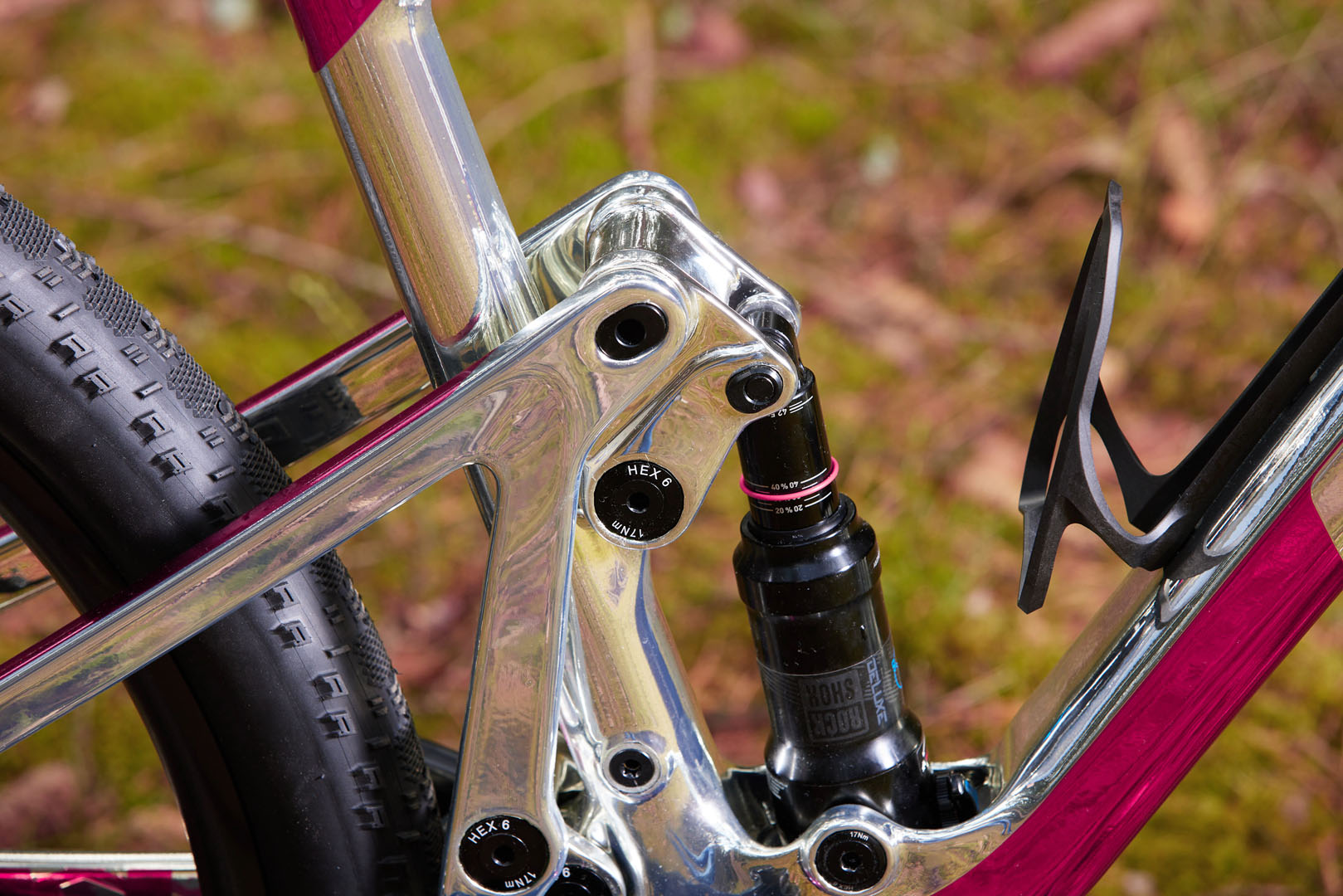 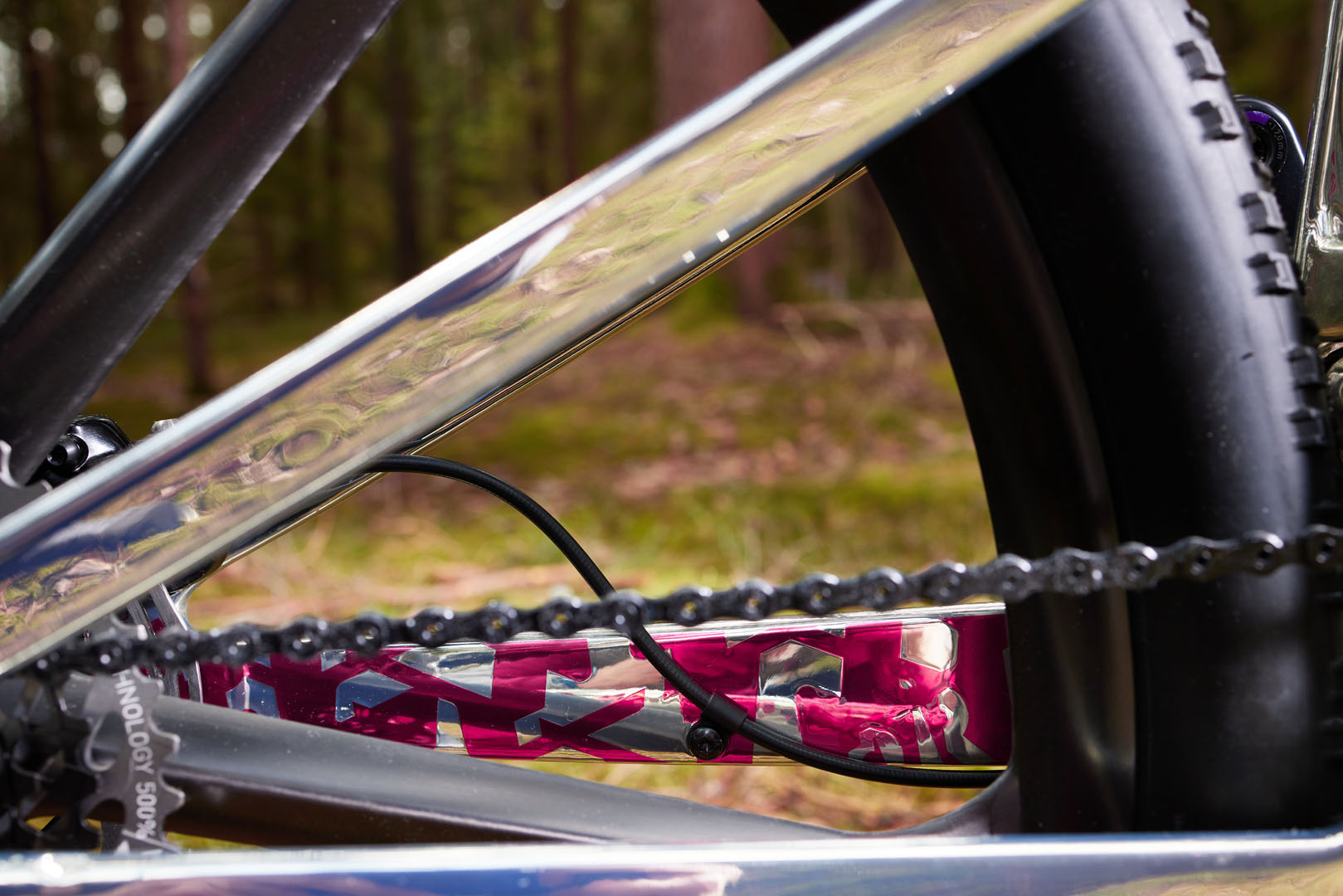 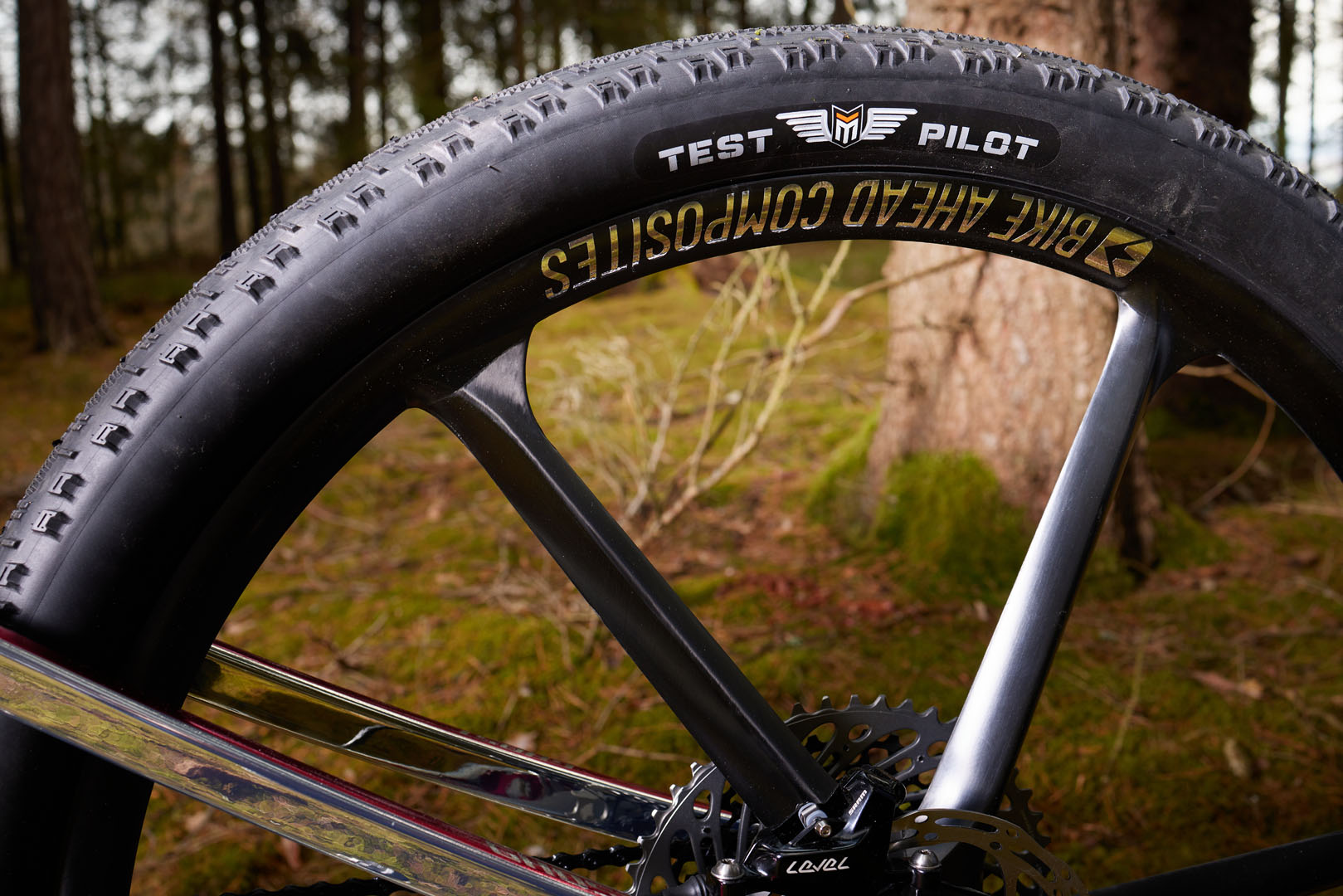